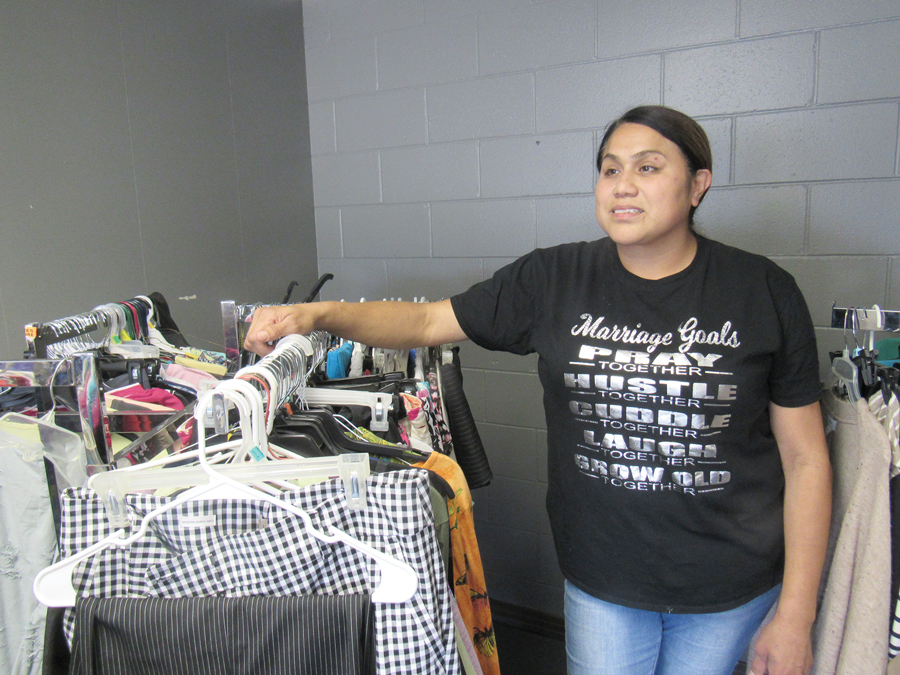 Julia Chavez said she personally inspects the clothing that is donated to Saving Grace Mission before making them available to those in need of clothing. Remembering how she was often dressed in rags as a child, Chavez said she’s determined to provide quality clothes for children in need. “I think back to the clothes I had to wear and how it made me feel,” she said. “No child who comes through this door is ever going to walk out feeling ashamed.” Slim Smith/Dispatch Staff

The interior of Saving Grace Mission is filled with boxes, containers and plastic bags stuffed with clothing. The job of inspecting, sorting and putting the clothing on display racks proceeds slowly, carefully, deliberately.

To understand why, you have to go back 30 years or more and unpack the story of Julia Chavez, 36, the mission’s founder.

It is a story of trauma, hope and recovery.

Long before her first arrest at the age of 12 — the trip to jail that would be the first of probably 30 or more, Chavez said.

Long before she showed up beaming with pride at an eighth-grade school pageant, only to be told at the door she could not participate because she had been suspended for fighting the week before.
Long before she married at age 16 to avoid being forced back into a school where she felt humiliated and ostracized.

Long before she sat in a prison visitors room and was told her three young children were crying in the lobby because they were not allowed to see her.

Long before any of that, there were the clothes.

She remembers the clothes.

Today, Chavez is a happy stay-at-home mom of four, married to a successful businessman, Sergio Chavez. It’s a life she could not have imagined even a decade ago.

But she can’t forget the clothes.

“I came from a family of migrant workers,” she said. “We were raised in poverty, always moving, always with very limited resources. We always wore hand-me-down clothes, clothes that didn’t fit, stuff people didn’t want or was too bad to wear anymore. I never forgot what that was like.”

It was the first humiliation. It wouldn’t be her last.

Her father went to prison when Julia was 8, leaving her mom and four children to scratch out a living as best they could as migrant workers, moving from Texas to Louisiana, sometimes traveling to stay with her godmother in Hamilton, which Julia considers her hometown.

She was laughed at, bullied and isolated, which fueled the anger and self-loathing that translated into fights and petty crime. And always there was poverty, soul-crushing poverty.

“I spent most of my life feeling rejected,” she said.

At age 12, she and another girl went to a local store. As she has done before, Julia stashed away food, this time a loaf of bread. With her friend’s encouragement, they also took some make-up. As they left the store, they were caught shoplifting. A few hours later, Julia was released from jail and returned home.

“They took the makeup, but didn’t take the bread,” she said. “So I went home and was able to give my brothers and sister something to eat.”

Through her teens and early 20s, what followed was a series of drug abuse, violence and failed relationships, culminating in a three-year prison sentence for drug trafficking, followed by a parole violation that sent her back to prison for another six months.

Two things happened to change the trajectory of her life.

First, she had the encouragement of Sergio.

“He was my friend then, really my only friend,” she said.

Then there was the day she sat in the prison visitor’s room, her mother telling her she would have to cut the visit short because Julia’s three children were crying in the lobby because the prison staff wouldn’t let them see her.

“That hurt me so bad,” she said. “I knew that I had hurt my kids, and I wanted this to be the last time I hurt them. I was so angry with myself.”

She returned to her cell and began to pray.

“I prayed for God to help me and teach me how to change because I didn’t know how to change, how to be a better mother, how to live a better life and have a productive life and never go back to jail,” she said.

Ordered to a rehabilitation center at the state hospital at Whitfield, Chavez received trauma therapy, something she said was essential to building her new life.

“I never knew how to deal with all the trauma until then,” she said.

She married Sergio, and when his concrete finishing business began to take off, she left to help him in the business. Two years ago, the Chavezes had a daughter, and Julia became a stay-at-home mom of four.

It was about that time that she encountered a poor family whose children desperately needed clothing. She sent out a call for help on Facebook. Soon, the donations of clothes poured in, far more than needed.

That’s how Saving Grace Mission began, as an effort to distribute those donated clothes to people in need.

For three years now, the mission has grown. A year ago, Chavez registered Saving Grace Mission as a 5013(c) nonprofit. In October, she moved the mission to its current site at 548 Highway 45 Frontage Road.

Each Saturday, from 9 a.m. until noon, those in need can “shop” for free clothing, shoes, household items and other goods. She also will open the mission by appointment during the week if someone in need calls her at 662-889-6006.

It’s a self-funded mission, so the going and growing is slow, Chavez said.

“I can use pretty much any help I can get,” she said.

There is one task she reserves strictly for herself, however.

“I look at every piece of clothing,” she said. “It has to be in good condition, the kind of clothes any person would want to wear. I think back to the clothes I had to wear and how it made me feel.
“No child who comes through the door is ever going to walk out feeling ashamed,” she said. “…That’s what this is all about.”