Local store owners saw as good, if not better, Black Friday despite pandemic 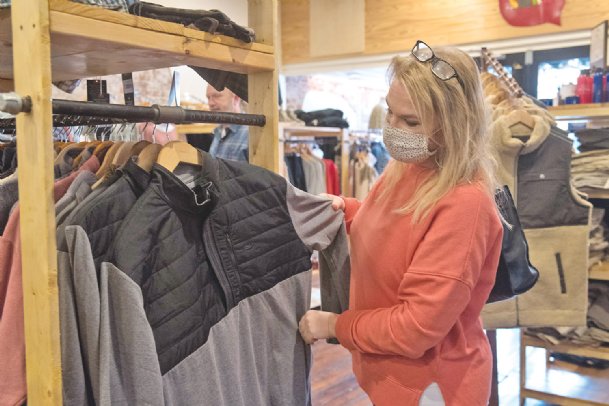 Stephanie Godfrey shops for her son and husband at Park Place Boutique and Salon in downtown Columbus. "I don't want to fight the crowds. I wait till it dies down and then I go out," Godfrey said. Godfrey said she goes to Park Place every year. Gail Stevens, store owner, said the turnout this year seems more than past years. She said there were about 100 people lined up before opening. Photo by: Deanna Robinson/Dispatch Staff

Gail Stevens was not sure what to expect in her store this Black Friday.

The COVID-19 pandemic had shut down her business — Park Place Boutique and Salon in Columbus — for several weeks between March and May. Brick-and-mortar stores like hers have taken hits as many customers turned to online shopping nationwide.

But instead of offering deals online this year, Stevens said she still prefers serving customers in person during the holiday shopping season.

Despite the threat of the pandemic, many other local store owners in the Golden Triangle decided to open shop on Black Friday primarily for in-person shopping, and some of them have seen a higher foot traffic in store compared to previous years.

Stevens said she saw people lining up outside her store on Main Street when she opened her store at 10 p.m. Thursday.

“We opened then and never closed,” she said Friday morning. “… Our sales in the first three hours far exceeded prior years.”

Others saw fewer in-store customers than previous Black Fridays but said sales have been on par with past years despite the pandemic.

“Luckily, people are making larger purchases but there’s way fewer people,” she said. “We’ve ended up with fantastic days, but it wasn’t because we saw 100 people that day.”

Meanwhile, B-Unlimited in Starkville saw its Black Friday crowd on Nov. 17 — the last day before final exams at Mississippi State University — because the semester ended early due to the pandemic, with commencement on Wednesday and most students out of town by Black Friday, sales associate Hannah Sanford said.

Even so, the store has seen “the same, if not more” holiday shopping this year compared to past years, Sanford said. B-Unlimited offered coupons for a future discount to the store’s first 20 customers on Friday, and all 20 coupons were issued within an hour of opening.

Other stores are seeing less traffic, such as Book Mart and Cafe in Starkville, owner Carolyn Abadie said. The store offered 20 percent off all products for Black Friday and has offered curbside pickup and delivery since the pandemic began in March.

“Everyone knows the COVID numbers are up really high right now, so I’m not expecting a big shopping weekend like we normally have,” Abadie said.

B-Unlimited’s Black Friday sale of 30 percent off all products was only available in stores and not online. The store is headquartered in Fayetteville, Arkansas, and has locations in several Southeastern Conference college towns.

“We originally planned to have (the website) ready before Black Friday so that we could have people shop online, but it just wasn’t ready on time,” she said.

Some business owners said they were reluctant to offer deals exclusively online because they believe the tradition of brick-and-mortar shopping is important and irreplaceable.

At Park Place, customers are required to wear a mask, and hand sanitizing stations are set up around the store, Stevens said. The business has a website for online shoppers, she said, but she fears the option may drive them entirely online.

“Once you convince somebody to go online, they are going to shop a lot online,” she said. “(Online shoppers) are not nearly as loyal to local (businesses) on the web as (when) they shop in person.”

“It allows us to ask the questions so that we can help them find what they are really looking for as a gift,” she said.

Lou Wyatt, store manager of the Mossy Oak Outlet Mall in West Point, agrees. The mall is also primarily offering deals in store with safety measures in place, such as mask mandates and hand sanitizer stands, she said.

“I love trying stuff on before I buy it,” she said. “Online, you don’t have the expertise and the staff members telling you what’s going to work best for you. … You don’t get that personal touch with online sales.”

In-person shopping, Borland said, is just a tradition she finds hard to abandon.

“That’s what we like and that’s what America is made of, with people seeing each other and touching merchandise,” she said. “That’s just the way it’s always been and it’s hard to get away from it.”

Barbara Bigelow, director for Main Street Columbus, spent much of Saturday visiting downtown businesses to see how their weekend fared. Even those with fewer crowds, she said, reported solid sales.

“It’s been a fabulous weekend of shopping,” she said. “People are ready to get out and do stuff as long as they can do it safely.”