Golden Triangle Regional Airport Director Mike Hainsey, left, joins Kim Jackson of the Mississippi Transportation Safety Administration, during a press briefing Friday at the airport held to alert travelers on the federal government's new "Real ID" policy. The policy requires that all licenses used as identification to board planes carry a special designation verifying the authenticity of the license. As of Oct. 1, no one without the Real ID designation on their driver's license will be allowed to board commercial aircraft. Photo by: Slim Smith/Dispatch Staff

Starting in October, airline passengers must have a special designation on their driver’s licenses in order to go through airport security checkpoints and board planes for travel.

On Friday, Golden Triangle Regional Airport Director Mike Hainsey joined Kim Jackson, security director for Mississippi Transportation Safety Authority in a press conference about the new policy, which was passed by Congress in 2005 but has yet to be implemented — something it calls “Real ID.”

If passengers don’t have a Real ID designation on their licenses, they must have some other approved form of identification — primarily a passport or military ID.

“Beginning Oct. 1, 2020, TSA estimates that every day as many as one million people will come to TSA checkpoints without a compliant ID,” Jackson said. “At that point, it’s pretty simple: No compliant ID, no air travel.”

The policy came about in the aftermath of the 9/11 attacks, when Congress passed a wave of legislation designed to prevent future acts of terrorism, including creating the Department of Homeland Defense and TSA and dozens of others measures, large and small.

Some measures were put in place almost immediately. Others, like the Real ID policy, have been phased in over time.

Hainsey said awareness of the new requirement continues to be low.

“As of last week, the estimate was that only 37 percent of people have a compliant ID,” Hainsey said. “This is something we really need to get to word out about.”

Real IDs are issued by driver’s license bureaus in each state, but the response has been slow.

“There are still some states that haven’t started issuing the compliant licenses and some are way behind in issuing them,” Hainsey said. “That concerns us, too, because we have passengers from all over the country.”

Mississippi began issuing Real ID compliant licenses two years ago. On the Mississippi license, Real IDs carry a gold star located in the top right part of the license. The gold star is embedded with information that TSA checkpoint screeners identify with an ultra-violet light.

Anyone whose license does not have the gold star designation should visit their driver’s license bureau and obtain a replacement license. Jackson said there is no additional fee for the replacement license other than the fee charged by the state.

“The purposed of Real ID is to make sure terrorists are not able to use fraudulent identifications to board airplanes,” Jackson said.

Jackson said travelers under the age of 18 who do not have driver’s license or other approved forms of ID can travel only if the parent or responsible adult has a compliant ID.

Jackson emphasized that Real ID will be required not just at airports, but at every federal facilities where ID is required, including military installations such as Columbus Air Force Base.

With word of the change slow to reach the public, Hainsey said GTR will begin a “Gold Star” campaign.

“Anyone who checks in and doesn’t have a compliant ID will still be able to fly up to Oct. 1, but we’ll be handing out information cards to make sure they know about this change,” Hainsey said. “We’re doing everything we can to get the word out so travel goes smoothly when the change takes place.” 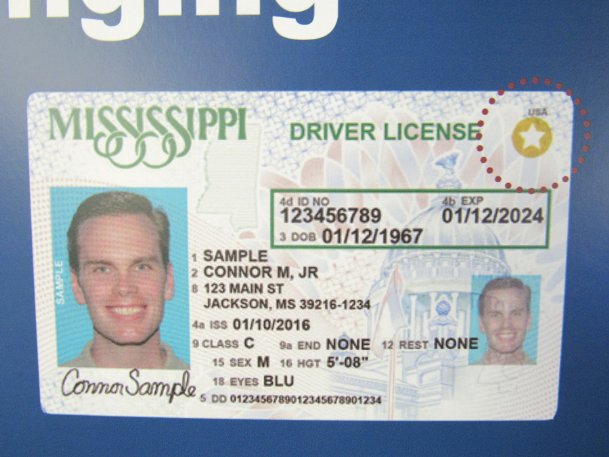 Pictured is a sample driver's license showing where the Real ID designation — a gold star in the top right corner — would appear. Beginning Oct. 1 airline passengers must have the designation or an alternative form of identification to fly. Photo by: Slim Smith/Dispatch Staff