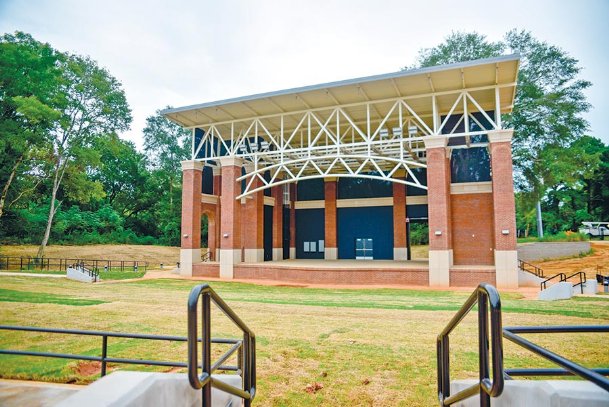 With the approval of two bids to build a front entry wall and perimeter fencing along the east side of the Sen. Terry Brown Amphitheater during Tuesday's Columbus City Council meeting, the venue may be available for free events as early as May, according to city engineer Kevin Stafford, Photo by: Dispatch file photo

More than four years after construction started, the first event at the Sen. Terry Brown Amphitheater could be held, perhaps in time for the Market Street Festival concert.

During Tuesday’s city council meeting, City Engineer Kevin Stafford announced low bids for two projects that will secure the perimeter on the north and east sides of the facility. The council unanimously approved the low bid of $309,360 from JMorgan Co. of Columbus to build the brick wall/entry way on the north end of the venue. The council also voted unanimously to approve the low bid of $86,300 to Columbus Fence Co. for the fencing along the eastern perimeter.

“As you know, the state Legislature set aside $500,000 (for the project) last year,” Stafford told the council. “That money won’t be enough to complete everything we want to do there, but it will allow us to continue with some major additions. Together, the two projects come in at a little under $400,000.”

Ward 3 Councilman Charlie Box asked if the remaining money would be enough to complete restroom facilities.

“That’s a lot bigger ticket item than what we have left over,” Stafford said. “We could bring in port-a-potties like we do for other events until we can build permanent restrooms. That would allow us to go ahead and use the venue in the short-term.”

Stafford suggested using the remaining $104,340 to build a concrete pad and install plumbing on the site where the permanent restrooms could be built.

“We could sit the port-a-potties on the pad for the time-being,” he said.

Although the work, when completed, will not allow the facility to host paid events because the west side of the property will not have fencing, it will allow for free events.

“The main thing that needed to happen was to secure the east side so that kids couldn’t wander off toward the (Tombigbee) River,” Stafford said. “That’s a safety issue that will be addressed by these two projects.”

With a 150-day construction contract, Stafford said the amphitheater work may be completed in time to host the Market Street Festival concert in May.

“If all goes well, it could be ready by then,” Stafford said. “I’ve talked to (Main Street Columbus director) Barbara Bigelow about that and she’s interested. That would be a great way to open the facility, but it all depends on how quickly the work gets done.”

The stage for the amphitheater was complete in 2017 with funds from the Legislature.

In other business, the council approved promotions and pay increases for 12 city employees that had been delayed since last summer.

At the time of the promotions, the city’s budget crisis prevented the city from providing the accompanying raises. The employees were told then the pay raises would be provided in 2020.

“This was something we’ve been talking about since October or sooner,” Box reminded the council.

Ward 2 Councilman Joseph Mickens asked for clarity on what the promotions would mean.

“With these promotions, does that mean the city is going to hire people to fill their old positions?” Mickens asked.

Mayor Robert Smith said it would not.

“There aren’t going to be any additional hires,” Smith said. “These employees are just taking on additional duties that they have already being doing since last year. What we’re doing tonight is providing the raises that go along with those extra duties.”

The council unanimously approved the promotions and pay raises.