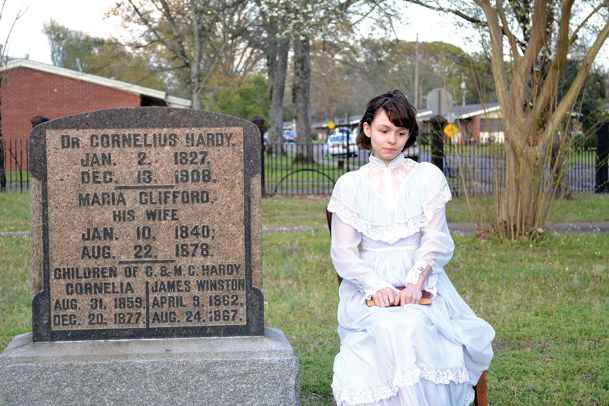 Mississippi School for Mathematics and Science junior Auriel Quiroz performs in front of a small audience at Friendship Cemetery during a dress rehearsal on Wednesday for the upcoming Tales from the Crypt history event. Quiroz portrays character Sarah Bibb Hardy, the second wife of Cornelius Hardy. Sarah Hardy was committed to an insane asylum for dementia shortly after her husband's death. Quiroz is the daughter of Julian and Angela Quiroz. Photo by: Mary Pollitz/Dispatch Staff

When Auriel Quiroz researched Cornelius Hardy, it was the lack of information on his second wife that fueled her theatrical performance idea for “Tales from the Crypt.”

Quiroz is one of nine Mississippi School for Mathematics and Science juniors performing up to four nights at Friendship Cemetery, portraying people who are buried there.

“My person was Cornelius. He started one plantation here and brought all of his brothers and cousins here and started a big boom,” Quiroz said. “When it came to choosing a part to play, I saw the word asylum and I thought it was really interesting.”

The MSMS U.S. History students begin the history project each August, and this marks the 29th year the project will bring the stories of Columbus’ former residents to life. MSMS history teacher Chuck Yarborough has spearheaded the program for the past 19 years, where he has seen drastic changes in that span.

“The change is in the amount of historical resources available to the students has increased,” Yarborough said. “The student research has been more solid. They also have really gotten into this idea of exploring the topics that are revealed to them by their research subjects. We have young women who explore gender roles and expectations of the late 19th to early 20th century because that’s fascinating to them.”

Admission is $5 for adults and $3 for students.

The ticket sales will go toward offsetting any production costs. The remaining funds are donated to the Columbus Cultural Heritage Foundation and a project chosen by the junior history class. In the past five years, “Tales from the Crypt” has donated $30,000 to charities.

Yarborough’s students start by choosing a name from Friendship Cemetery. They then find primary sources for a college-level research paper that’s due in December.

In January, students hone their focus on the most intriguing part of their research. Yarborough said 48 students auditioned and nine were selected to perform at the grave sites of their research. The remaining students, he said, will work on a production team to help with the event.

The reason behind this project, Yarborough said, is to try and bring history to life.

“We can’t really understand where we’re headed without understanding where we have been,” Yarborough said. “This project offers the entire community the chance to explore our collective past so we can create our most productive futures.”

Quiroz performs passionately as she is tasked with examining the harsh state of mental asylums in the early 1900s. Her character, Sarah, was admitted one year after husband’s death for dementia.

“I saw a record of what women were admitted for,” Quiroz said. “(One woman was admitted) for reading a novel. Sometimes, husbands didn’t want to be with their wives anymore, and they would admit them.”

Quiroz said she’s never participated in theater and admits she is nervous for opening day when she will perform for the first time in front of hundreds of people.

Junior Olivia Viguerie remembers touring MSMS as a sophomore and hearing stories of “Tales from the Crypt.” At that moment, she realized this was something she wanted to do.

Viguerie researched Lucy Torry, an art professor at the Industrial Institute and College, now known as Mississippi University for Women. Viguerie performs her monologue as if she’s talking to class of young art students. She exposes the gender roles and issues of the late 19th century.

“Every year, I see our alumni, strong and smart girls trying to enter men’s fields with the name of the Industrial Institute and College on their backs,” Viguerie says in her performance as Torry. “Never let them stop you. You girls are going to do great things, but you’re going to have to work long and hard before you do.”

Viguerie said she found out that Torry raised her daughter and grandson single-handedly in a house she owned herself.

“The thing I found most interesting about her story, is that I can’t find that her husband existed,” Viguerie said. “She lived to be about 80, and I cannot find her husband for the last 50 years of her life. She was also one the founding members of what is now MUW. She was really influential in what is now women’s studies. She was just very interesting.”

Yarborough said not only do students fine-tune their research skills, but the project also sparks creativity and provides a service to its audience.

“The research subject is the window of which they look in the past,” Yarborough said. “They can portray anybody. History is relevant when we discover understanding that we can apply to our own lives and communities.

“To me, there’s a magic thing that happens when you ask young people to commit to the community and do a service and they stand up and they do it,” he added. “Year after year, they commit to this community. I’m pretty proud of those kids. … This project offers the entire community the chance to explore our collective past so we can create our most productive futures.” Mississippi School for Mathematics and Science junior Olivia Viguerie, 17, practices her performance during a dress rehearsal for the upcoming Tales from the Crypt history event at Friendship Cemetery on Monday. Viguerie's character is Lucy Torry, an art professor for the Industrial Institute and College, what is now Mississippi University for Women. Viguerie is the daughter of Anthony and Julie Viguerie. Photo by: Mary Pollitz/Dispatch Staff