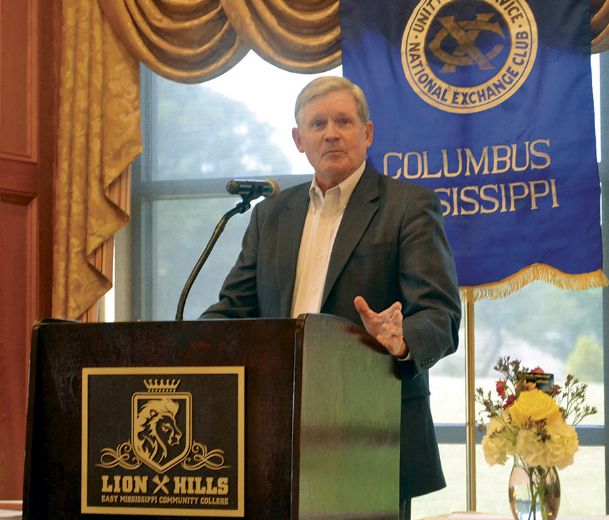 Failing at the daunting task, he came upon a man wearing game credentials and asked for help.

“Oh, you can park anywhere,” the man told Murray after learning he was an official.

That turned out to be a bad idea.

When Murray, who has been a replay booth official since 2016, returned to where he parked, he found two tickets, totaling $105, which included a “relocation fee” for moving his car to its designated spot.

Murray didn’t have to pay the fines after he explained the incident to the gate manager. Turns out, the gate manager knew exactly who had conveyed the misinformation, confirming with Murray it was the “stocky, red-headed guy.”

Murray will return to College Station on Sept. 8. This time he plans to park where he’s supposed to.

Tales from the road highlighted Murray’s talk to Columbus Exchange Club Thursday at Lion Hills Center, and some focused on police escorts he and fellow refs receive at games.

Murray even recalled traveling to the Rose Bowl in California with numerous police officers who kept traffic stopped on a four-lane interstate, just for the football officials and crew.

“We’re on the freeway in Los Angeles, California, going fairly fast, but nobody is passing us,” Murray said. “I turn around and look and there’s a motorcycle cop zig-zagging back and forth across the four lanes of interstate so that nobody could catch up with us.”

Murray has refereed SEC football since 1987, serving as a back judge before moving to the booth three years ago.

“Replay is more fun than I thought it would be,” Murray said. “I do miss being on the field. But you gotta keep up with college athletes. After a certain number of games that your legs have done, you can’t keep up with them.”

Murray briefly explained two new rules in college football this year, including a new kick-off rule. In an effort to prevent kick-off injuries, kick-off returners can now call a fair catch anywhere short of the 25-yard-line and receive a touchback, resulting in the offense starting on the 25-yard-line. Another rule that will be enforced this year is, essentially, a dress-code violation. By rule, each player must wear kneepads and have their pants long enough to cover their knees.

Murray said there isn’t a penalty, but a player will not be allowed to play until the uniform is fixed.

“The truth is, I think, they just look silly with pants that short,” Murray said. “Football pants aren’t supposed to be like that and I think that’s why they did it.”