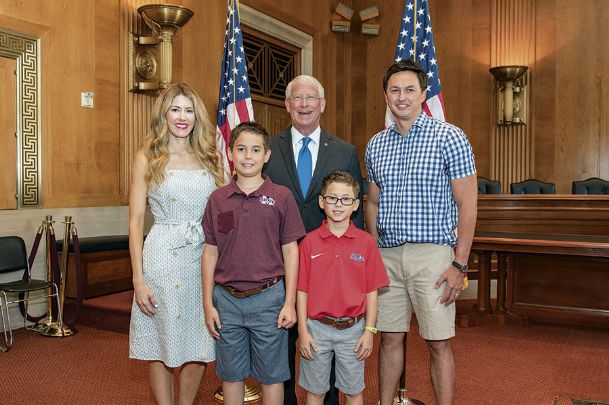 Richi Lesley, right, is pictured with his wife, Jessica, and two children, Mason, 10, and Wylie, 8, with Sen. Roger Wicker. When Wicker was still a member of the U.S. House of Representatives, he helped draft private legislation, H.R. 712, which granted Lesley permanent residence in the U.S. Photo by: Courtesy photo/Richi Lesley

In 2000, Richi James Lesley was enrolled in his final year at Mississippi State University when he learned something about himself that changed his life.

Days after securing a job offer, Lesley — a Caledonia High graduate and marketing major at MSU — found a letter in his mailbox from U.S. Immigration and Naturalization Service. Turns out, the Seoul, South Korea, native was an illegal immigrant, and up until receiving that letter, he had no idea.

More problematic, the letter said he was being deported.

“When I got a job offer with a good company, I thought life was about to turn a corner and everything would be easy, because college wasn’t,” Lesley said. “I never could get financial aid, and I never did understand why.

“This was all I ever knew,” he added. “I grew up catfishin’ and ‘coon hunting in … Mississippi. The idea that I was going to be deported back to South Korea was just absolutely bizarre.”

Shortly after his birth, he was placed in a South Korean orphanage.

A Columbus Air Force Base pilot stationed overseas, Lesley recounts, married a woman there. The couple adopted Lesley and a little girl, and planned to move back to the United States. But before they could make the move, Lesley said, the man died in a boating accident.

The pilot’s wife did not want to raise the kids alone, Lesley added, prompting the CAFB to contact the pilot’s mother — a 64-year-old widow at the time — in Mantachie, about an hour north of Columbus.

The pilot’s mother agreed to take in the 18-month-old Lesley and his adopted sister. CAFB flew the kids to Mississippi.

Lesley’s adopted grandmother raised him until he was 13. She then passed at age 78.

“We lived with a couple different families after that,” Lesley said. “We had lived with a family that turned out to be kind of a tough situation, so my sister and I literally ran away. Ultimately, we were placed in two different foster homes.”

That’s how Lesley came to Caledonia — first with an appointed foster family and later with an Air Force veteran, Jerry Spears, and his wife, Elaine.

“He came home with us multiple times over the weekends (usually after performances),” she added. “He would stay with us, and we could tell it was very upsetting for him, he was always very depressed, when he had to go home.”

Mid-week one month in 1993, Elaine remembers, Lesley visited her house and asked the couple if he could live with them.

“It just came out of the blue,” Elaine said. “It never occurred to us that he would want to come live with us.”

She and her husband were empty-nesters. They had two grown sons at the time and were adjusting to life on their own.

“It was kind of distressing to think of bringing a teenager into our home, so we told him to give us some time to think about it,” Elaine said.

A few days later, she had her answer.

“I had prayed all my life God would let me do something to help other people,” Elaine said. “I was praying that afternoon, and the Lord said ‘You’ve been praying to me for years for the ability to do something to help others. You’ve got an opportunity. Are you gonna take it or not?’ … I went straight to the phone and called my husband and said, ‘when you go to practice today, tell Richi yes.'”

Jerry and Elaine became Lesley’s legal guardians when he was 16. Under their care, he attended Caledonia High School, where he graduated in 1995.

Lesley described the Spears family as his “saving grace.”

Lesley had to enroll in high school under the McKinney-Vento Homeless Assistance Act, as he never had documentation — no birth certificate, no Social Security card.

“When I got to college, I just wanted to be an average, normal kid and not have any weird past,” Lesley said.

Just when he thought things were turning around, the INS letter arrived.

“I attended my first deportation hearing in Memphis, Tennessee, wearing my brand new suit to start my professional career in,” Lesley said. “The judge immediately stopped session when I walked in and got on to me. He assumed I was a young attorney. He said ‘I’m so tired of you young attorneys just walking into my courtroom. Son, go outside and register with the administrative assistant.’

“I just looked at him and said ‘Sir, I’m Richi James Lesley.'”

In fact, Lesley had showed up for his deportation hearing without an attorney, not realizing the seriousness of the matter.

Soon after, Lesley hired an immigration attorney who told him there was a 95 percent chance he would be deported. But he never was.

Some of his college buddies had connections in politics and leveraged those connections to try to keep Lesley stateside.

“There were multiple folks intervening on my behalf,” Lesley said, “reaching out to U.S. senators and congressmen. They were able to get the deportation halted.”

“U.S. Senator Thad Cochran and, at the time, Representative Roger Wicker both heard my story,” Lesley said. “I met with Senator Cochran face-to-face. He was able to look at me and validate how crazy of a story this was.”

Cochran and Wicker helped draft a private bill of legislation to give Lesley status as a legal alien admitted for permanent residence, which President George W. Bush signed on Oct. 30, 2004.

Lesley traded in that status four years ago to become a naturalized U.S. citizen.

Connecting with his past

Lesley, now 41 and living in Jackson, has been married for 14 years. He has two sons, ages 8 and 10. He’s the marketing director for a global dialysis company.

“After the birth of my first son, I did start wondering what it would be like to locate my biological parents,” Lesley said.

Last Christmas, his wife bought him an AncestryDNA kit.

“It sat in my office for about five and half months, and I finally, just recently submitted my DNA,” Lesley said.

Within about two weeks, he received an email with his results. He had one close relative, an aunt, also registered with the DNA bank.

Lesley reached out to the aunt, who put him in touch with his biological brothers — a brother, Dylan, who lives in Orlando, Florida; and a half-brother, Cian, who lives in Seattle, Washington.

A few weeks ago, the three brothers traveled to Tampa, Florida, to meet for the first time.

Before their initial contact, Sinclair said, he knew he had an older brother but didn’t know his name or whether he was alive.

“I sent him a message that said ‘So…there’s a rumor going around,'” Sinclair said, “and he wrote back ‘Bro!!!!!’ with five exclamation points.”

Now the two talk “all the time.”

“It’s pretty incredible what he’s made of himself and where he’s come from,” Sinclair said.

But Lesley doesn’t take all the credit.

“It’s just such a crazy story,” Lesley said. “I’m a devoted man of faith, and I’ve seen God do big, bold, crazy things in my life.” Richi Lesley, center, with his legal guardians Jerry and Elaine Spears of Caledonia. The Spears took Lesley in when he was 16. Photo by: Courtesy photo/Richi Lesley Lesley is pictured during his U.S. Citizenship Ceremony. He became a U.S. citizen about four years ago, after having lived in the country illegally for more than 20 years. Photo by: Courtesy photo/Richi Lesley Richi Lesley, right, is pictured with his legal guardians Jerry and Elaine Spears. The Spears took Lesley in when he was 16. Photo by: Courtesy photo/Richi Lesley Richi Lesley, left, is pictured with his biological brother Dylan Sinclair. The brothers are three years apart but each was unaware the other existed until this year. Photo by: Courtesy photo/Richi Lesley