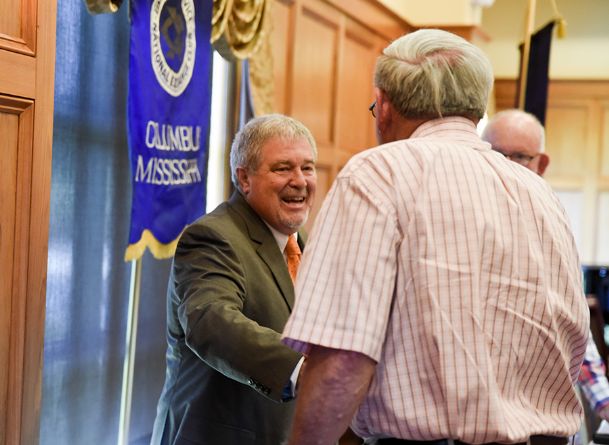 “To me, that’s one of the things that hurts our city a lot, is our schools, and I don’t mind talking about it,” Gavin said. “That’s one of the reasons why we can’t get anything here — why home sales don’t grow — is our city school system. We have to get it back on track.”

Gavin spoke to the Exchange Club as part of the group’s ongoing series of candidate forums. He’s seeking his third term on the board. His Democrat challenger, Whirllie Byrd, told The Dispatch she had planned to attend Thursday’s forum but couldn’t due to a medical issue.

CMSD carries a D rating, and has for the last three years. Several municipal candidates, in the mayoral race and council races, have expressed frustration with the schools’ poor rating.

The council’s first priority should be appointing “good, quality people” who respect taxpayer money to the school board, Gavin said. He touched on the board’s recent 3-2 vote against extended CMSD Superintendent Philip Hickman’s contract past 2018, saying board members were “taking some steps” to improve the situation. Though he declined to commit to whether Hickman should stay or go, he said the entire community needs to put more effort into improving the schools.

“Whether Dr. Hickman is the right person for the job or not, I don’t know — it’s not up to me,” Gavin said. “But we’ve got to do better than what we’re doing. And we can’t just keep talking about it. Talking about it is not good for anybody. Talking about it isn’t going to get anything done. It takes action.”

Gavin, a former educator of 37 years, also expressed frustration with what he described as over-involvement from administrators in schooling. He said they needed to focus on “good, quality teachers” and parent involvement.

“We got too many administrators,” Gavin said. “Administrators think they’re gods, (believing they) are education. That’s a bunch of crap. The battle for education is won in the classroom with the student, parent (and) teacher.”

Gavin also spoke about retail growth in the city, which he said was one of his primary goals when he was first elected to the council.

“I told the council we need to focus our efforts on retail development in the city,” Gavin said. “That’s where we get our money. The city gets most of its tax dollars from sales tax, not property tax. We make our money from businesses coming in to invest in us so they can sell you a hamburger, or sell you some type of goods that you can use.”

He said Columbus is losing less business to neighboring cities like Tupelo and Tuscaloosa, thanks to retail expansion in the past few years, and record sales tax income directly reflects the trend.

He said that’s allowed the city to do more, such as an ongoing $5 million city-wide road and sidewalk improvement project. But Gavin said even that, which amounts to about $700,000 for each councilman, isn’t nearly enough to solve all of Columbus’ paving problems.

For example, he said Fifth Street, in front of Baptist Memorial Hospital-Golden Triangle, needs paving, but he couldn’t afford to add in the $250,000 project to this year’s paving work.

Wilkins-Wise Road, which goes to the Lock and Dam, would take $400,000 to repave, though Gavin said the city is working to get a federal grant that could pay for 80 percent of that cost.