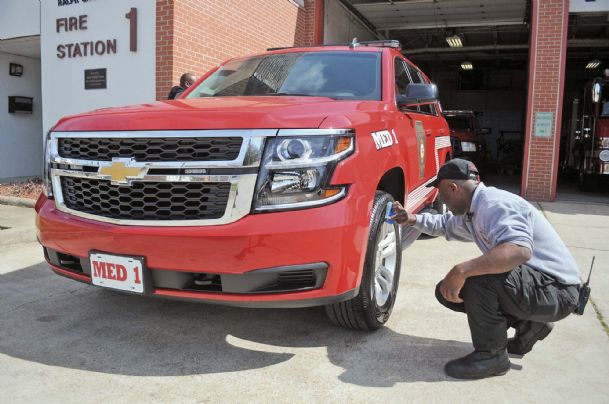 Columbus Fire Department engineer Lamarcus Phillips puts a nice shine on the tires of a 2016 Chevy Tahoe Monday that will serve as the Med 1 emergency vehicle that will respond to medical assistance calls for the department. Photo by: Mark Wilson/Dispatch Staff

Columbus Fire & Rescue has a new emergency response vehicle meant only for response to nonlife-threatening emergencies.

The new van, called Med 1, will respond to non life-threatening medical emergencies, according to Public Information Officer Anthony Colom. Officials hope it will be the first of two such vehicles the department gains by the end of 2016.

Columbus Fire & Rescue always responds to emergencies in the city. Of the 6,108 calls for service it responded to in 2015, 5,100 were medical emergencies, according to Joe Dillon, the city’s public relations coordinator. With so many calls, the maintenance cost of keeping up firetrucks was high. The city hopes that having these new vehicles respond to nonlife-threatening emergencies will save wear and tear on the city’s firetrucks.

Firetrucks will still respond to car accidents and life-threatening emergencies such as heart attacks and strokes.

Fully equipped, the new vehicle cost $42,000, which came out of the city budget, Colom said. Six new hires will man the vehicle, each on a firefighter’s salary.

Columbus Fire & Water also purchased a digital video display to attach to the back of vehicles, Colom said. The screen will broadcast public relations messages reminding drivers to pull to the right for service vehicles and to check smoke alarms.

“It’s something we’re trying to do,” Colom said. “(We’re) trying to think outside the box and do some unconventional marketing for the department.”