Home » News » National » Next in line? McCarthy is realist with conservative appeal

Next in line? McCarthy is realist with conservative appeal 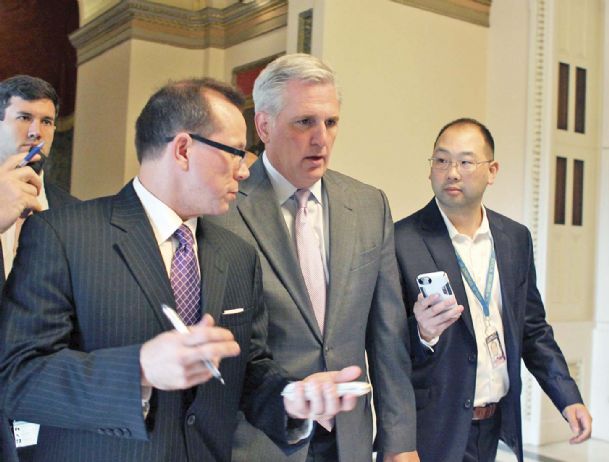 WASHINGTON — Rep. Kevin McCarthy has risen to the upper reaches of House leadership mostly on the basis of his people skills and political smarts rather than his policy chops.

The California Republican, who is the overwhelming favorite to succeed John Boehner as speaker, has relied on those skills to navigate the treacherous waters of the fractious GOP conference.

But they won’t change the unpleasant reality of the limits the tea party-driven House confronts in a capital city dominated by a Democratic president — and the resulting frustration for conservatives who stormed Washington on a wave of opposition to President Barack Obama.

Like Boehner, McCarthy is a realist. But conservatives frustrated with Boehner’s willingness to strike deals with Democrats see an ally in McCarthy, who cut his teeth as an aide to powerful former Rep. Bill Thomas, whose seat he easily won in 2006.

“Kevin has done a great job of reaching out to conservatives,” said Rep. Mick Mulvaney, R-S.C., among those who helped push Boehner out. “It’s fair to say that if Kevin were to run he would be able to draw votes from across the conference.”

In the hours after Boehner’s shocking announcement, McCarthy stayed quiet, but GOP lawmakers said he was a likely bet to win the top job. Unlike Boehner or previous Democratic speakers like Tom Foley of Washington or Jim Wright of Texas, McCarthy has never chaired a committee — and lacks a signature legislative accomplishment like the No Child Left Behind education law that Boehner help shepherd through Congress during President George W. Bush’s first term.

But the 50-year-old McCarthy has thrived in the rough-and-tumble world of House Republicans, raising money for lawmakers across the spectrum, listening on end to the sometimes unreasonable demands of tea party lawmakers and sensing which way the political winds are blowing.

McCarthy has been a loyal lieutenant to Boehner, for instance, backing up the outgoing speaker’s plan to remove a controversy over “defunding” Planned Parenthood from a stopgap spending bill that’s needed to avoid a government shutdown next week. And he supported Boehner last year as one of only 28 Republicans to vote to raise the so-called debt limit without seeking concessions from Obama.

But McCarthy parted ways with Boehner in early 2013 on a vote to increase tax rates on wealthier filers and, more recently, sided with conservatives who made a cause celebre of opposing the reauthorization of the Export-Import Bank, which helps finance purchases of U.S. exports by foreign buyers.

The bank’s authority lapsed this summer even though Boehner privately supported extending it.

“He understands what it takes on both the political side and the policy side,” said Rep. Devin Nunes, a GOP ally from an adjoining district.

Even before Election Day 2006, McCarthy set about raising money for fellow Republicans. Shortly after arriving in Washington, McCarthy began navigating the leadership waters and secured several lower-profile posts. And when Republicans won back the chamber in 2010 and the No. 3 spot opened up, McCarthy easily moved up. Last year, the unexpected defeat of then-Majority Leader Eric Cantor, R-Va., in a GOP primary opened up the No. 2 post, and McCarthy grabbed that, too.

Then, as now, there is no credible alternative to McCarthy’s ascent.

There’s more to his success than luck, however. Inside leadership, McCarthy’s accessibility and open-mindedness has won him friends in all corners of the GOP conference and he’s more popular among junior lawmakers than Boehner.

“He is a savant of human relationships and that makes him somewhat unique,” said Rep. David Schweikert, R-Ariz., who admits their relationship has had ups and downs.

“The reason he’s so successful with the members is he knows their districts in addition to knowing them,” said Erica Elliott, a former aide and confidante. “Kevin knows 100 percent of the time exactly where the conference is.”

Boehner all but endorsed McCarthy on Friday.

“I’ll tell Kevin, if he’s the next speaker, that his number-one responsibility is to protect the institution. Nobody else around here has an obligation like that,” Boehner told reporters. “Secondly, I’d tell him the same thing I’ve just told you. You just do the right thing every day for the right reasons, the right things will happen.”

But Boehner let slip Friday that he had been planning to leave Congress at the end of last year but changed his mind in mid-2014 after Cantor was no longer in line to succeed him. That appeared to tip his opinion that McCarthy, at least back then, needed more seasoning.

Some Democrats aren’t sold on McCarthy.

“I don’t think he is as dedicated to the institution as John Boehner was,” said Rep. Bill Pascrell, D-N.J. “Winning is the whole thing.”