Dak Prescott, who may win the Heisman Trophy, was a chatterbox when young.

“He could talk the horns off a Billy goat as a little boy,” Pam Ebarb, one of his cousins, said.

They would be on some rural Louisiana road — Ebarb driving, an elementary-aged Prescott in the back seat — and he would ask a child’s question. An answer led to another question, then another and another.

Ebarb, who lives in Texas now, remembers having to finally turn to the child she calls “the sweetest boy I ever knew,” and say, “Dakota! Stop!”

By the time he put on shoulder pads at Haughton High School in northwestern Louisiana, Rayne Dakota Prescott, who most know as “Dak,” had grown out of his talkative ways.

“He wasn’t a real loud guy,” Rodney Guin, his high school coach, told The Dispatch this week. “He wasn’t the guy who screamed and got in your face. He was someone who led by example — and that’s fine.”

As the starting quarterback at Mississippi State University now, Prescott has the college football world talking about him.

Behind his electrifying play, the undefeated Bulldogs have moved to No. 3 in The Associated Press Top 25 poll. With a win over second-ranked Auburn University at Davis Wade Stadium this weekend, they could rise higher. Buzz is happening. The team is on the cover of Sports Illustrated and in the pages of Rolling Stone magazine this week.

Prescott, meanwhile, is being called the SEC’s best quarterback and leading many analysts’ Heisman-watch lists.

“It has to be Prescott,” Edward Aschoff, an ESPN.com SEC reporter, wrote Tuesday. “You know, the real Heisman Trophy candidate at this point in the season. The guy who bulldozed through LSU’s defense in Baton Rouge and then turned around and shredded Texas A&M two weeks later.”

So who is he? Where did he come from?

Prescott is 21. He is 6 feet, 2 inches tall. He weighs 235 pounds and has 6.5 percent body fat. He can squat nearly a quarter ton and scripture is tattooed across his broad back.

The youngest of three sons born to Nathaniel and Peggy Prescott, he is named after one of three bulls on the cartoon show, “Wild West C.O.W.-Boys of Moo Mesa.”

He was a cheerful and talkative child with a penchant for fashion.

“Peggy and I always laughed because he loved to change clothes a billion times when he was little,” Pam Ebarb said.

He also had a child’s enthusiasm for fun. Another cousin, Bailey Gilbeaux, said that once, while visiting Central Mall in Port Arthur, Texas, he got so excited about an arcade he ran head-first into a glass door, thinking it was open, and busted open his lip.

Their parents split when the boys were young. That pulled the Prescott brothers closer to their mother and when Dak was in the first grade, they moved to Haughton, Louisiana, a small place (pop. 3,400) about 18 miles east of Shreveport.

The area’s biggest employer is Barksdale Air Force Base and a blue collar work ethic is common among the tight-knit community.

Dak’s older brothers played football at Haughton High School, a 4A school. Roy Lang, the sports editor at the Shreveport Times newspaper, said they were great defensive linemen. (Tad Prescott once had six sacks in one game.) But before Dak Prescott even reached high school, people were calling him a special athlete.

Glenn Benton, who graduated from Haughton High School in the 1960s and is a police juror in Bossier Parish today, remembers a former Haughton coach pulling him aside at church one Sunday.

“He told me, ‘You think his brothers are good? Wait until (Dak) comes around,'” Benton said. “Those coaches were licking their lips when he was in the seventh grade.”

On Haughton High School’s football field, which is surrounded by pine trees, Dak Prescott would transform from the carefree boy who shared a bedroom with his mother into a Louisiana football legend.

He wore No. 6. His high school coach, Rodney Guin, doesn’t know why. (“It was probably just the one we handed him,” he said with a laugh.)

What Guin, who has coached at Haughton for more than 15 years, does know, is that Prescott was a competitor.

“He wanted to be the best at everything he did,” the coach said. “It didn’t matter if he was playing basketball or tug of war, he wanted to win.”

Prescott didn’t start until he was a junior. Even during his sophomore year, though, there were flashes.

During a playoff game that season against a rival high school, he threw a final pass on a flea-flicker that resulted in a game-winning touchdown with less than a minute to play, Lang said.

People also noticed that Prescott carried himself with a grown man’s poise.

“Dak was very quiet, not a big ‘me’ guy,” Lang said. “You could definitely tell he commanded respect from his teammates, even at a young age. He was very polite and polished. Heart and soul of that team.”

Guin’s team ran a spread offense with a lot of designed quarterback runs — much like MSU’s offense now — and Prescott excelled. By the end of his high school career, he had thrown for more than 5,000 yards and 66 touchdowns. As a senior, he ran for 950 yards and 17 touchdowns.

“He was as good as advertised and played like a man amongst boys,” Gillespie said. “He was bigger than everyone else and was almost impossible to bring down with just one player.”

What Prescott did during his final regular season game, in 2010, is still talked about in northwestern Louisiana. It was a road game against Parkway High School. Both teams were undefeated and Prescott played with a torn medial collateral ligament and meniscus in a knee.

“People thought that since he couldn’t run, Haughton would not be able to win,” he said. “Dak stood in the pocket and just threw all over the secondary…Haughton won by six, but it wasn’t even that close of a game.”

By the end of Prescott’s senior year, scouts were hounding Haughton.

There have been rumors that LSU wanted to sign Prescott, but wanted him to play a position other than quarterback. Guin said that is not true. LSU recruited him as a quarterback, the coach said, but Prescott simply liked MSU head coach Dan Mullen and his staff.

“I think he fell in love with the coaches who recruited him,” Guin said. “It just fit for him.”

“We’re a small town, sort of like Starkville,” Guin said of Haughton, “and it felt right. It felt like home.”

Mullen, in an interview with The Dispatch this week, said that when the team scouted Prescott, they saw “a winner.”

“I saw a young man with an unbelievable work ethic and a desire to be great in everything he does,” Mullen said. “I saw that when I was around him. He just has a drive to be great.”

At MSU, Prescott chose to wear No. 15, a nod to Tim Tebow, the former University of Florida quarterback who won the Heisman Trophy in 2007.

Prescott’s success with the Bulldogs has managed to turn many Haughton residents — who typically pull with passion for LSU — into MSU fans: The Advocate newspaper reports that Gene Couvillion, the principal at Haughton High School, has a Mississippi State flag in his front yard.

For all his wins and the hype surrounding MSU’s season, Prescott, the people from his hometown say, remains the same young man he was in Haughton.

A woman from the area who attends MSU tells about how every time she passes Prescott on a campus sidewalk, he makes a point of speaking.

That attitude is what Guin — who plans on attending every MSU home game the rest of this year — brags the most about.

“He’s the same every day,” the coach said. “Anytime you see him or talk to him, he’s the same guy. None of this talk has changed him…that’s probably what we’re the proudest of — the way he conducts himself off the field. He’s still got time for anybody that calls him.”

Prescott’s biggest fan, he will tell you, was always his mother. Peggy Prescott, after a battle with colon cancer, died last November.

On the inside of Dak Prescott’s left wrist, is a tattoo. It’s the word “MOM” and in the middle of the “O” is a ribbon in support of the fight against cancer.

“Any time I look down, I see it and I think about her,” Prescott told The Dispatch. “She was my best friend, my mom, my coach, my trainer. She wanted us to be tough, to be hard, so she was hard on us.”

When he scores a touchdown these days, he points to the sky.

That’s for Peggy, who always called her youngest son, when he was growing up in Haughton, “the faithful one.”

Some information presented was culled from articles previously published at CBSsports.com, The Advocate newspaper in Baton Rouge, La., and Nola.com. 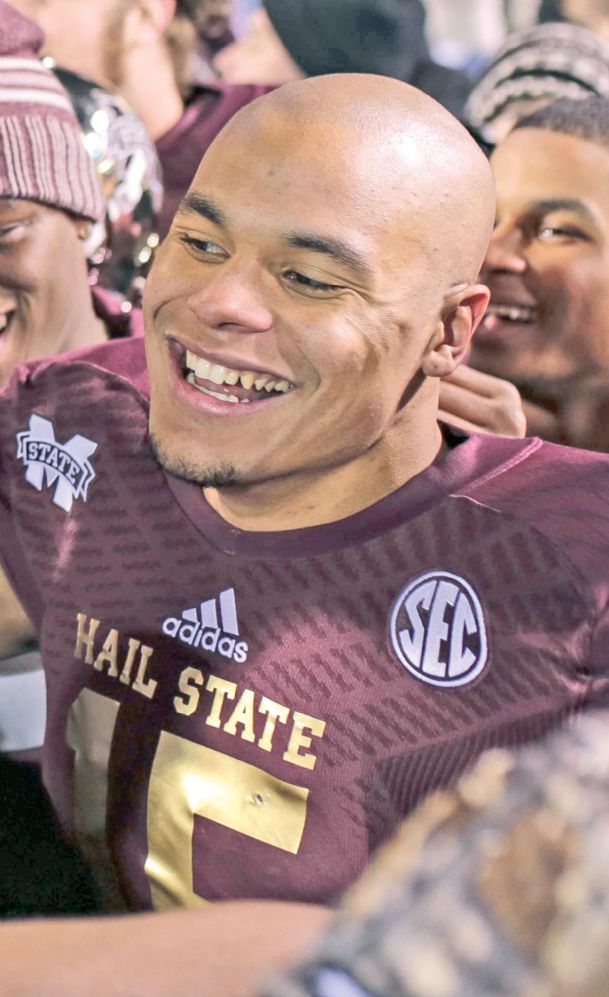 Dak Prescott, center, is pictured with his older brothers and Jace and Tad in this family photo. Photo by: Courtesy photo