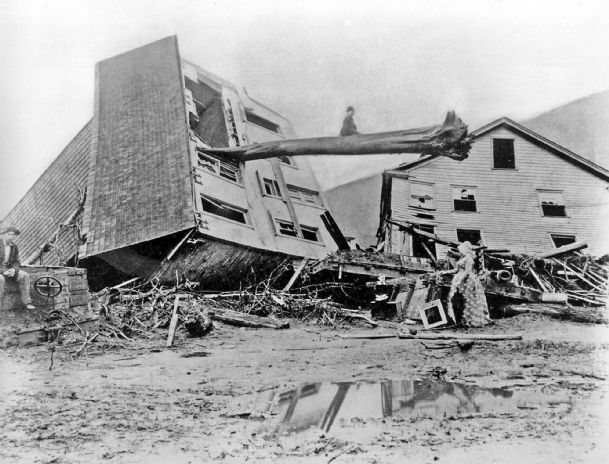 In this historical photo from May 31, 1889, survivors stand by homes destroyed when the South Fork Dam collapsed in Johnstown, Pa. As officials prepare to commemorate the 125th anniversary of the enormous Johnstown Flood of 1889 that killed 2,209 people, new research has helped explain why the deluge was so deadly. Photo by: AP Photo

PITTSBURGH — A privately owned dam collapsed in western Pennsylvania 125 years ago on May 31, 1889, unleashing a flood that killed 2,209 people. The terrible stories from the Johnstown Flood of 1889 are still part of lore because of the gruesome nature of many of the deaths and the key role the disaster played in the rise of the American Red Cross. Here’s some of what’s known about the flood, one of the deadliest disasters in U.S. history.

Heavy rains and runoff from clear-cut hillsides raised the level of a man-made lake that was an exclusive retreat for industrial barons including Andrew Carnegie, Henry Clay Frick and Andrew Mellon. The dam that held back the lake, also the property of the retreat, gave way around 3 p.m., sending a surge of water over 30 feet high down the Little Conemaugh River Valley. It swept away entire communities, 1,600 homes, people and even locomotives.

Debris including floating houses and barns backed up at a stone bridge at Johnstown, 15 miles downstream from the dam. The 30-acre pile, which included barbed wire from a damaged factory, caught fire, trapping many of those who had survived the initial flood and burning them to death.

Tales of survival and tragedy

Some people survived by clinging to the tops of barns and homes. Gertrude Quinn Slattery, 6, floated through the wreckage on a roof, and when it came close to the shore a man tossed her through the air to others on land, who caught her.

Anna Fenn Maxwell’s husband was washed away by the flood; she was trapped in the family home with seven children as the water rose. Maxwell survived, but all of her children drowned. “What I suffered, with the bodies of my seven children floating around me in the gloom, can never be told,” she later recalled.

The body of one victim was found more than 100 miles away in Steubenville, Ohio. Bodies filled morgues in Johnstown and river towns downstream until relatives came to identify them. Among the victims were 396 children and 99 entire families. About 750 victims were never identified.

Warnings about the safety of the dam had been ignored. There was widespread criticism of members of the club after the flood, but no successful lawsuits. Some historians and legal experts attribute the ensuing fury over the lack of fault to the emergence of strict liability laws in the United States.

“The Johnstown flood was not an act of God or nature. It was brought by human failure, human shortsightedness and selfishness,” author David McCullough said in a 2003 interview.

The flood was also first major natural disaster in which the American Red Cross played a major role. Clara Barton and five workers arrived in Johnstown on June 5, less than a week after the flood.

Despite extensive flood control measures, about two dozen people died in a March 1936 flood, and 85 died in in a July 1977 flood that caused over $300 million in property damage.

The fear of big floods remains. University of Pittsburgh-Johnstown professor Paul Douglas Newman describes the city as a giant drain that sits at the bottom of several watersheds, all prone to flooding.

What we know now

University of Pittsburgh-Johnstown researchers have used ground-penetrating radar and computers to analyze the dam site and the volume and speed of floodwaters that hit Johnstown at 4:07 p.m., an hour after the break. Richard Burkert, president of the Johnstown Area Heritage Association, says the research suggests that the dam “was in much poorer shape” than previously known. It also suggests that the dam had been designed with two spillways to handle periods of heavy rain, but only one was in use.