Probe seeks cause of NYC train crash that killed 4 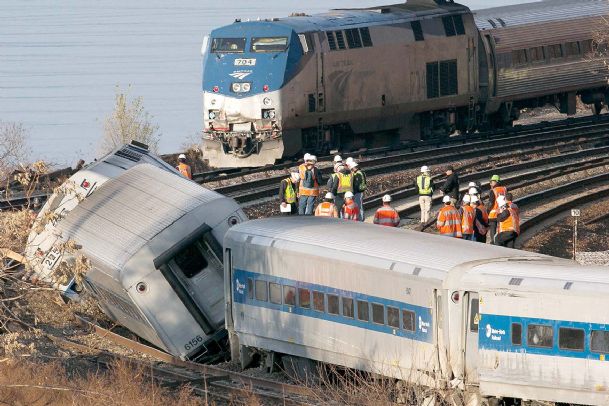 An Amtrak train, top, traveling on an unaffected track, passes a derailed Metro North commuter train on in the Bronx borough of New York. Photo by: AP Photo/Mark Lennihan

NEW YORK — Federal authorities today were beginning an exhaustive investigation into what caused a New York City commuter train rounding a riverside curve to derail, killing four people and injuring more than 60 others. Officials warned the 26,000 weekday riders on the affected line of the nation’s second-biggest commuter railroad to brace for crowded trains during the morning commute.

The locomotive of the Metro-North train was re-railed at 4:20 a.m., and two cranes were in place to lift the rest of the toppled cars pending approval of the National Transportation and Safety Board, spokesman Aaron Donovan said.

About 150 people were on board when the train derailed Sunday morning on the Hudson line in the Bronx. Donovan said the railroad believed everyone aboard has been accounted for.

The National Transportation Safety Board said its investigators could spend up to 10 days probing all aspects of the accident that toppled seven cars and the locomotive, leaving the lead car only inches from the water at a bend in the Bronx where the Hudson and Harlem rivers meet.

The NTSB said it would consider whether excessive speed, mechanical problems or human error played a role in the crash.

It was the latest accident in a troubled year for Metro-North, which had never experienced passenger death in an accident in its 31-year history.

Joel Zaritsky, who was dozing as he traveled to a dental convention aboard the train, woke up to feel his car overturning several times.

“Then I saw the gravel coming at me, and I heard people screaming,” he told The Associated Press, holding his bloody right hand. “There was smoke everywhere and debris. People were thrown to the other side of the train.”

The MTA was providing shuttle buses Monday morning to ferry passengers between stops and to another rail line, but it urged riders who could work from home to do so.

NTSB board member Earl Weener said at a news conference Sunday the agency had just begun its investigation and hadn’t yet spoken to the train’s engineer, who was among the injured. Authorities did not release his name.

Investigators were due to examine factors ranging from the track condition to the crew’s performance. Gov. Andrew Cuomo said the track did not appear to be faulty, leaving speed as a possible culprit for the crash. The speed limit on the curve is 30 mph, compared with 70 mph in the area approaching it, Weener said.

Authorities did not yet know how fast the train was traveling but had found a data recorder, he said.

One passenger, Frank Tatulli, told WABC-TV that the train appeared to be going “a lot faster” than usual as it approached the sharp curve near the Spuyten Duyvil station.

Nearby residents awoke to a building-shaking boom. Angel Gonzalez was in bed in his high-rise apartment overlooking the rail curve when he heard the roar.

“I thought it was a plane that crashed,” he said.

Within minutes, dozens of emergency crews arrived and carried passengers away on stretchers, some wearing neck braces. Others, bloodied and scratched, held ice packs to their heads. In their efforts to find passengers, rescuers shattered windows, searched nearby woods and waters and used pneumatic jacks and air bags to peer under wreckage.

The MTA identified the victims Sunday as Donna L. Smith, 54, of Newburgh; James G. Lovell, 58, of Cold Spring; James M. Ferrari, 59, of Montrose; and Ahn Kisook, 35, of Queens. Three of the dead were found outside the train, and one was found inside, authorities said. Autopsies were scheduled for Monday, the New York City medical examiner’s office said.

Eleven of the injured were believed to be critically wounded and six more seriously hurt, according to the Fire Department. After visiting an area hospital Sunday evening, New York City Mayor Michael Bloomberg told reporters that the 11 who originally were critical no longer appeared to have life-threatening injuries.

As deadly as the derailment was, the toll could have been far greater had it happened on a weekday, or had the lead car plunged into the water instead of nearing it. The train was about half-full at the time of the crash, rail officials said.

For decades, the NTSB has been urging railroads to install technology that can stop derailing caused by excessive speed, along with other problems.

A rail-safety law passed by Congress in 2008 gave commuter and freight railroads until the end of 2015 to install the systems, known as positive train control. PTC is aimed at preventing human error — the cause of about 40 percent of train accidents. But the systems are expensive and complicated. Railroads are trying to push back the installation deadline another five to seven years.

Metro-North is in the process of installing the technology. It now has what’s called an “automatic train control” signal system, which automatically applies the brakes if an engineer fails to respond to an alert that indicates excessive speed.

Such systems can slow trains in some circumstances but not bring them to a halt, said Grady Cothen, a former Federal Railroad Administration safety official.

Sunday’s accident came six months after an eastbound train derailed in Bridgeport, Conn., and was struck by a westbound train. The crash injured 73 passengers, two engineers and a conductor. In July, a freight train full of garbage derailed on the same Metro-North line near the site of Sunday’s wreckage.