As the last tourists exited the doors of the antebellum homes featured during Columbus” 70th Annual Spring Pilgrimage, organizers and owners are gradually settling back into a normal routine following almost two weeks of receiving visitors from other states and countries.

“This has been the best Pilgrimage ever. It was wonderful seeing all the different tour buses from other states parked throughout town,” said Brenda Carradine, who opened Amzi Love Home and the gardens of the Lincoln Home for tours during the annual event.

Carradine said the Columbus Convention and Visitors Bureau deserve credit for their promotional efforts, along with the carriage rides and the use of the new double-decker bus.

“That is going to be an economic boon for Columbus for a long time to come,” she said.

Carradine said visitors from numerous states and countries stayed in Columbus taking part in the tours of homes, churches and gardens.

“This is a pretty big thing for Columbus. I think it is a wonderful thing for Columbus to have all these visitors here for two weeks staying in hotels, eating in our restaurants, and going to our stores,” she said.

Columbus Cultural Heritage Foundation Director Nancy Carpenter said the final tally on the number of visitors for Pilgrimage, as well as the economic impact it had, has not been finalized, but in all, visitors from 39 states and 12 countries were in the Friendly City for the 13-day event.

She credited the volunteers who helped give tours at the homes, as well as city government officials for their support.

“Without the volunteers, we could not have made it. The support we received from the city, from Mayor Smith and others, including the Public Works Department, was also valuable,” she said.

Along with Pilgrimage, Carpenter said other activities taking place during the same period included Grilling on the River, a 10K run, Noon Tunes, the Giant Possum Town Yard Sale and the Mayor”s Unity Picnic.

“There was something for everyone. It is great that we were able to have a wide array of other activities along with Pilgrimage to make it fun for everyone,” she said.

“You could not have asked for anything better,” she said.

Carpenter was also pleased by the response of visitors taking carriage rides and using the double-decker bus.

“On three occasions, the double-decker bus had to be used to transport people whose tour buses broke down or were stuck in the mud,” she said.

Dixie Butler, owner of Temple Heights, said she has been a part of Pilgrimage in Columbus for 41 years, and still enjoys having visitors at her home.

“We had a lot of visitors from different places, and they were carried away with what Columbus has to offer with its historic homes,” she said. “I am proud to be a part of Pilgrimage. I have been a part of this for 41 years, and I always enjoy it. It is always nice to hear people talk about how they enjoy visiting your home and the other homes, and the wonderful time they had,” she said.

Melanie Snow, whose family owns Waverley Mansion near West Point, said the 70th Annual Pilgrimage was also good for them.

“This was a fantastic pilgrimage, one of the best. We received a number of tour groups from Starkville, Meridian and other parts of Mississippi, as well as tour groups from Nashville, Tenn. We also had groups from Georgia, Arkansas and Alabama to visit. We were pleased they were able to see our beautiful azaleas,” she said.

“These volunteers not only represented our nation, but we had some from other countries, including France. We thank them for their time and efforts,” she said.

Another big part of Pilgrimage that enjoyed success was the annual Tales From the Crypt, which was held for several nights at Friendship Cemetery,

Chuck Yarborough, a history instructor at the Mississippi School of Mathematics and Science who coordinates the event, was pleased with how things turned out.

“The 20th annual Tales was a big success,” he said in an e-mail. “Our top night for attendance was this past Friday, with 591. Total attendance for our six performances was 2,379.”

Yarborough added that there weren”t any major glitches this year, and the good weather also was a factor in the big turnouts.

He said those who attended the performances seemed to like all of the cast.

“At some point throughout the past two weeks, every performer was identified by somebody as their favorite. To me that”s a great compliment to the hard work and great job the MSMS students have done with research and performing Tales,” he said.

Allen Baswell was previously a reporter for The Dispatch.

Pilgrimage Tales from the Crypt 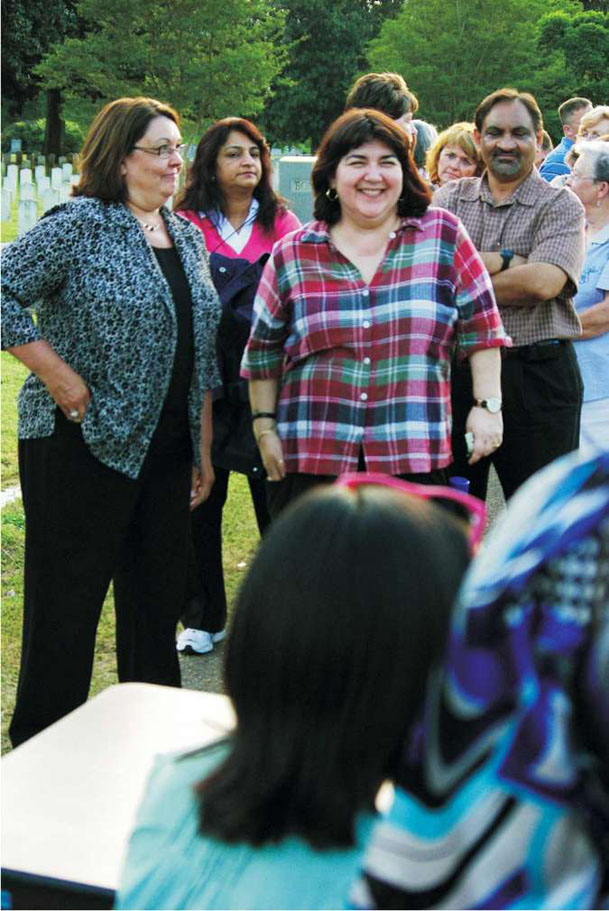 Dee Bond, Caledonia, and Anne Palmer, Starkville, wait in line for Tales from the Crypt to begin at Friendship Cemetery. Photo by: Kelly Tippett At First United Methodist Church in Columbus, John Dyson, left, gives Jim Brown, of Ridgeland, information on the history of the church Saturday during the Columbus Spring Pilgrimage. Brown said he had toured almost all the churches and several houses. Photo by: Luisa Porter Playing the violin for the Friendship Cemetery tour during Tales from the Crypt is MSMS student Henry Wang. Photo by: Kelly Tippett