Right bites: These appetizers can score big at any Super Bowl party 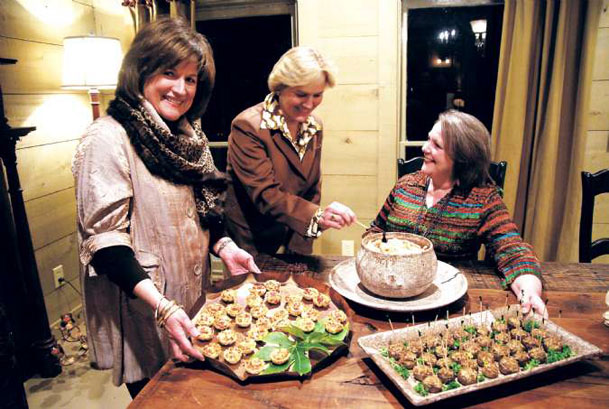 From left, Martha Bozeman, Sandra DePriest and Carla Guyton are pictured with three quick-and-easy appetizers suited to everything from a Super Bowl bash to an engagement party. The Columbus cooks share their recipes and tips today for mini tomato tarts, marinated shrimp and stuffed mushrooms. Photo by: Kelly Tippett

Here it comes -- Super Bowl XLV. The Green Bay Packers and Pittsburgh Steelers are deep in preparation for the NFL''s big bash Feb. 6, but so are plenty of football fans who enjoy having friends and family over to enjoy the season''s grand finale.

For many, the game''s the thing. For others, it''s the socializing. But either way, most Super Bowl parties are fueled by game day food that''s tasty and snackable. When planning a menu, select easy-to-eat items that allow you to enjoy the camaraderie. Don''t get stuck slaving in the kitchen.

"These marinated shrimp are so easy, you feel guilty when asked how you made it," laughed the Rev. Sandra DePriest about this wonderfully simple way to serve a perennial party favorite. When in the kitchen, the Episcopalian priest usually enjoys baking pies and cakes, "so I''m always looking for shortcuts when it comes to appetizers, and this is a perfect one."

There are plenty of more time- and ingredient-intense marinade recipes out there, but this one uses Paul Newman''s Own olive oil and vinegar dressing to deliver distinctive flavor. Frozen cooked shrimp work for this, but if cooking your own, Sandra recommends adding Old Bay Seasoning and lemons. Her steps are outlined in the recipe included.

"They''re so simple, just four ingredients in the filling," she said. For this Patty Roper recipe found in Mississippi magazine''s 2010 bridal issue, Martha uses original flavor Rotel tomatoes, but notes anyone wanting more kick might opt for a spicier version.

She prefers Hellman''s mayonnaise and, when it comes to bacon bits, uses hickory smoked and avoids the overly-large bits, which make the filling a little chunky for the mini phyllo cups.

"Remember, the cheese will melt down, so don''t be skimpy when filling the cups," said this good cook, who also tips the mushroom tart appetizer recipe found in the Grand Heritage cookbook. "I may put a little chopped basil in the tarts sometimes, for a little extra flair," she added.

"But if there are a lot of men in attendance, you better plan to double or triple the recipe, because they love them!" she smiled. "I''ve made these for the guys at the ''Man Cave'' several times and never seem to prepare enough," she said, referring to a private Columbus gathering spot famous for food and fellowship.

Mushrooms can be stuffed with such a variety of fillings, including bacon, shrimp, crabmeat, different cheeses or bread crumbs, noted Carla, who was startled to see more than 500 recipes come up on the Internet one day when she looked up stuffed mushrooms.

"Occasionally, I''ll prepare an assortment to serve," she explained. "That way, you''re covered in case you have a vegetarian or someone with food allergies." Carla also shares her recipes for buffalo chicken dip and marinated crackers, two other quick fixes that are easy snacks, whether it''s third-and-long or during the big game''s much-hyped commercials.

One bottle Newman''s Own olive oil and vinegar dressing

(Bags of frozen cooked shrimp work fine. Run cold water over the frozen shrimp until soft. Pop the tails off and drop them in boiling water for about five minutes. Cool slightly before covering with dressing.)

Three packages of mini phyllo cups (15 to a package)

Some of the mushroom stems (chopped)

One box of saltines