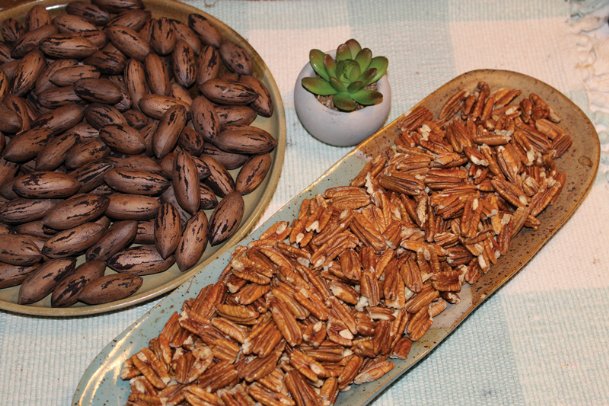 The season's pecans, like these from Jan Swoope's front yard, are popular in dishes for the holiday table. But there are also dozens of ways to quickly turn shelled pecans into delicious snacks. Read on for recipes. Photo by: Jan Swoope/Dispatch Staff

Right on schedule, a windfall of pecans has blanketed my front yard. I've mentioned in this space before that my husband, Oop, persistently follows their daily drop every year, from one side of the tree's wingspan to the other. I am of some sporadic help in this weeks-long effort. Our pecans are not huge, but they are usually plentiful. There's a feeling of satisfaction in hauling 5-gallon buckets of nuts into Duke Pecan Co. in West Point to have the harvest shelled in short order. We bag them up to give away to family and friends. Most people use them for holiday cooking. Pecans can enhance almost anything from oatmeal to ice cream -- salads, entrees and desserts of so many kinds. But today, the focus is on snacking -- on fairly simple, quick recipes that turn those golden pecans into tempting nibbles.

Starting with basics, you can simply roast pecans, either in the oven or on the range. For the oven, preheat to 300 F and spread pecans evenly on a baking sheet. Bake them 10 to 15 minutes, stirring often until the pecans are fragrant and lightly browned. (You might want to undercook them slightly because pecans will continue to cook after being removed from the oven, says aggie-horticulture.tamu.edu.) Cool off pecans completely before enjoying.

On the range, place pecan halves in a skillet large enough to prevent overcrowding. Cook over medium heat 10 to 15 minutes until fragrant. Stir frequently to prevent burning. Either way you roast or toast, store your finished pecans in an air tight container in the fridge or freezer.

Explore other sweet and savory ways to snack on pecans: Maybe you'll be tempted by the recipe for cinnamon sugared pecans, orange pecan snacks, even microwave pecan fudge and pralines. And here's a completely new one on me -- barbecue pecans.

At my house, our second delivery of full 5-gallon buckets is almost ready to go to West Point for processing. When I bag the shelled results to give away, I plan to add a few of today's easy recipes with them. I hope they'll make for some tasty snacking in the holiday season ahead.

3/4 cup (one and one-half sticks) margarine or butter