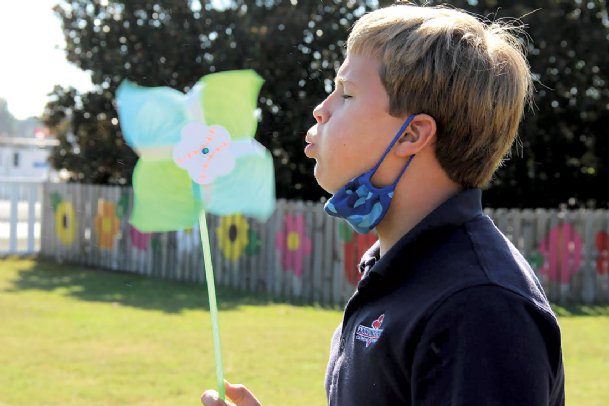 Annunciation Catholic School student Campbell Callaway, 11, tests out the pinwheel Thursday he made for his school's participation in a worldwide Pinwheels for Peace project. More than 200 handmade pinwheels will be "planted" in front of the school on Monday, which marks the International Day of Peace. Campbell is the son of Cooper and Emily Ann Callaway of Columbus. Photo by: Katie Fenstermacher/Courtesy photo 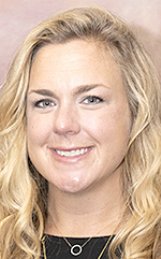 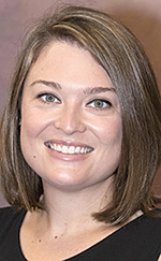 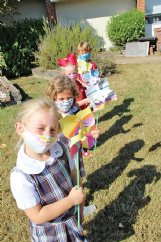 From front, 5-year-olds Cali Bradley, daughter of Chad and Amber Bradley of Columbus, Olivia Dimino, daughter of John and Elizabeth Dimino of Starkville, Kate Ross Miller, daughter of Robert and Jeanie Miller of Columbus, and Miller Graham, son of Chad and Haley Graham of Columbus show off pinwheels they made at Annunciation Catholic School.
Photo by: Katie Fenstermacher/Courtesy photo

Imagine more than 200 handmade pinwheels spinning in the breeze, each one bearing a hope for peace from a child. That colorful sight will greet anyone passing Annunciation Catholic School at 232 N. Browder St. in Columbus on Monday -- International Day of Peace. For the 11th year, ACS students from 4 years old through eighth grade will "plant" their pinwheels in front of the school, becoming part of a much larger worldwide movement known as Pinwheels for Peace.

The art installation project started in 2005 by two teachers in Coconut Creek, Florida, is a way for youth to express feelings about what's going on in their world. Youth are often bombarded with television images, video games, music and social media that contains conflict. Pinwheels' visual public statement instead emphasizes the importance of peace and unity. In its first year, the project inspired about half a million pinwheels spinning in more than 1,300 locations globally. In 2019, that number grew to more than 4.5 million pinwheels in over 3,500 places including Europe, Asia, Australia, Canada, the Middle East, Africa and South America.

"This is something childlike and innocent," said Cathryn Borer, coordinator of Annunciation's pinwheels project and mother of two sons who attend ACS, ages 8 and 10. "In this world that is anything but peaceful, it is a time for us to focus on peace, trying to find peace and express it."

Each student has spent the past several days making a pinwheel using a template available at pinwheelsforpeace.com. They fill one side with thoughts about peace, tolerance and living in harmony with others. For very young children, that may mean drawings of hearts, or a rainbow, a picture of a beach or possibly a family photo.

"I made a peace sign on mine," reported second-grader Henry Borer.

The project gives children pause to explore some of their personal thoughts, depending on age, about issues from bullying to social justice.

Borer remarked, "I do think even the little ones get it on some level; the older ones on a deeper level."

On the opposite side of the card stock, each student adds a painting, collage or other artwork of their own design.

What does peace mean to you?

Pinwheels for Peace is non-political. And peace doesn't necessarily have to be associated with the conflict of war. It can be related to intolerance or peace of mind. It takes on different meanings for different people, but in the end, comes down to a simple definition shared by Fenstermacher and the Pinwheels for Peace site: "A state of calm and serenity, with no anxiety, the absence of violence, freedom from conflict or disagreement among people or groups of people."

In years past, Annunciation students have gathered for a ceremony on the annual International Day of Peace before putting their pinwheels in the ground. Due to the pandemic, this year's "planting" will be different.

"We'll call them class by class to come out and plant them," said Borer. The pinwheels are expected to remain up for several weeks, weather permitting.

However the installation is carried out, the impact of a field of pinwheels -- simple symbols of childhood -- turning in the wind, can be inspiring, Borer continued.

"It's so beautiful," she said.

So, drive by to see more than 200 handmade pinwheels dancing in the breeze in an east Columbus schoolyard. Then, imagine almost 5 million of them spinning in cities around the world Monday -- each one carrying a hope for peace.

1. One night, to help all year: Loaves & Fishes adapts fundraising to carry on its mission COMMUNITY

2. Tune in to a Halloween 'feast' with Seneca's Oedipus ENTERTAINMENT

3. In the garden with Felder: The faux folk of autumn COLUMNS

4. Community Calendar for the week of October 25, 2020 ENTERTAINMENT