Read me a story: With quacks, neighs and moos, homegrown storytime gains a global audience 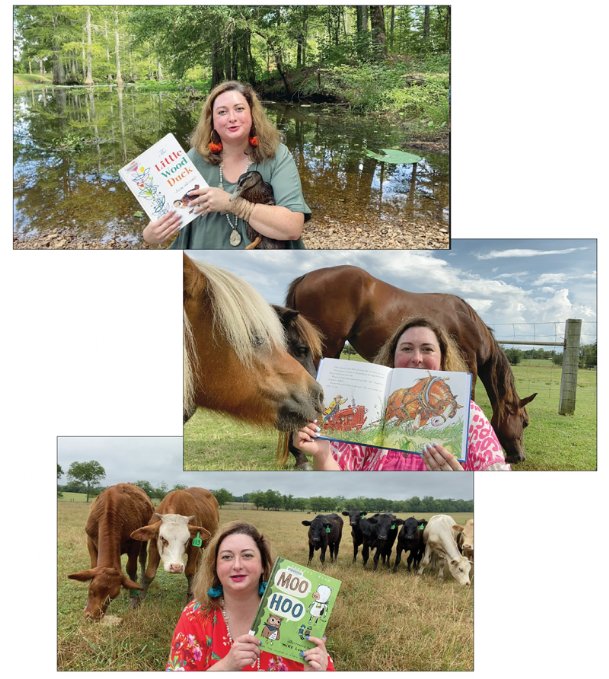 Starkville Public Library Children's Librarian Loraine Walker has used a large supporting cast of animals for her "Miss Rainey's Virtual Storytime" posted on the library's social media every weekday since the COVID-19 pandemic halted in-person story time. Walker has now created 115 videos that have spread to an audience throughout the country and abroad. Photo by: Courtesy photos

Time was, pre-COVID-19, when children's librarian Loraine Walker -- "Miss Rainey" -- would regularly read books to wide-eyed youngsters at the Starkville Public Library. More often than not, she enlisted animal hand puppets as helpers. Most eager listeners were regulars who came for the stories, smiles and hugs.

Then, like so many libraries nationwide, the Starkville facility had to close its doors in March due to the novel coronavirus. Determined to maintain the connection with "her kids," Walker made a promise.

"I told the children we'd do a virtual story time every weekday until we were able to have story time like we used to," she said. "Of course, when I started this in March, I thought it would last like three weeks. But when I make a promise, I keep it. This one's just taking a lot longer than I thought."

"It was spring in Mississippi, and everything was beautiful outside. I love nature and nature photography, and I just wanted to do something different," said Walker, who is currently earning a master's degree in library science. "I'll do anything to get kids interested."

That's meant seeking out as many animals and natural settings as possible that fit the books she chooses for daily recorded readings.

Walker's supporting cast has so far included peacocks, cattle, skunks, llamas, turkeys, horses, hogs, geese, goats, donkeys, chickens, rabbits, hummingbirds and bees. Outfitted with just a cellphone and tripod, she treks into the middle of a herd of bovine, or sets up a lawn chair next to llamas and goats, or reads in the grass next to a gigantic pig. The resulting eight-to-12-minute videos -- 115 of them so far -- of Walker reading and interacting with animals are posted at or near 10 a.m. weekdays to Starkville Public Library's Facebook, Twitter and Instagram.

Walker's animal encounters are far from scripted, which might mean a curious pony nibbling at a book page or a bossy rooster staking out territory. During one book reading, the librarian spied a (non-poisonous) snake nearby.

"I just kept kind of side-eyeing it and kept reading a little faster," the nature lover laughed. "It's an adventure, and there have been a few days when it's been tough to do, but I've gotta tell you, it's been a really good thing."

"Every day, it's 'I want to watch Miss Rainey,'" said Simmonds, a teacher at Overstreet Elementary School in Starkville. "Some of (the videos) you play over and over and over again. He just loves it. It's his little learning school outlet. He's a big animal person, so they just made it for him. Whatever story she's reading, she has those animals in the background and that makes his day."

Walker set out to stay connected with the children she wasn't able to see face-to-face. What she didn't anticipate was the new audience the videos would reach.

Early evidence surfaced in April, when Walker received a Facebook message from a grateful librarian in Brooklyn, New York. More messages followed. Libraries around the country began sharing the video links, including the Marine Corps Air Station Miramar library in California. Homeschool groups and teachers have picked them up to use in teaching settings. The videos have spread to other countries. To date, Walker has heard from viewers in England, Ireland, Scotland, France, Spain, Italy, Wales, Australia, New Zealand, Norway, India, Pakistan, Uganda, Egypt and several other countries in Africa, among others.

She occasionally gets interesting questions, from stateside and abroad.

Other queries are, she said, "amazing."

"I just had a librarian in Tunesia contact me," Walker shared. "They just started a school in her small town and somehow she saw a video and she's contacted me to help come up with a list of books some aid workers are trying to get together for her school library. ... This is just the wonder of the internet."

Does knowing there's an audience far beyond Starkville watching her videos increase the pressure?

"It did in the beginning, but last week a goat knocked over a camera three times during a video and now I just say, 'Sorry, guys,' pick it up and keep reading," Walker said.

Connections she's making have been therapeutic.

"It's so hard not being able to see our children. It's been nice to talk to other librarians and know that they're missing their kids, too. ... You get into being a children's librarian because you dearly love children and believe in early literacy. You're truly passionate about it."

Walker continues to seek out books that, while entertaining, carry a message.

Even when in-person story time can resume, Walker foresees at least periodic virtual components in the library's repertoire.

"To tell the truth, it's serving a need I really didn't know was there -- there are a lot of children who are immunocompromised. Even if we took COVID out of the picture, there are children who just can't come into the library."

Starkville Public Library Assistant Director Kara Roberts said, "It's been amazing watching this, and Loraine has done a great job at it. We have comments all the time from people that are thankful for it, and seeing the different places around the world that are watching it is really cool."

People have been kind in sharing their animals, space and time, said the innovative Walker. She's on the look-out for even more creatures to star in virtual story time. The order of the day remains, "lights, camera, action."

"I just had to let the children see me even if I couldn't see them," she said, "because I always told them Miss Rainey would be there for them, and I meant it."

Editor's note: View videos at facebook.com/STKPUBLIB/ and on other library social media.