Pandemic painting: When there's 'nothing else to do,' express yourself 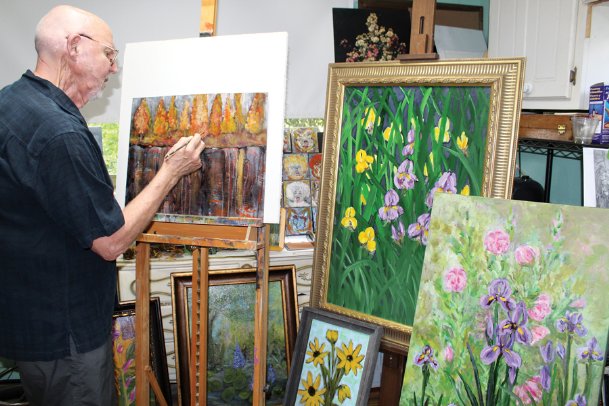 When planned travels were canceled due to COVID-19, Ralph Null, pictured Wednesday in his Columbus home studio, took to the canvas as a way to stay occupied and channel creativity. He has emerged with almost 180 paintings that will be shown at the Columbus Arts Council's Rosenzweig Arts Center throughout September. A public reception is 5:30-7 p.m. Thursday. Null will also give "art stroll" talks through the exhibit Sept. 8, 15 and 22 at varying times. For more information, visit columbus-arts.org or call 662-328-2787. Photo by: Jan Swoope/Dispatch Staff

While some recent acrylic paintings by Null are as large as 3-by-4 feet, he has created about 90 "smalls" during the months of pandemic.
Photo by: Jan Swoope/Dispatch Staff

Organization is key in Ralph Null's compact home studio. The pandemic has meant shortages in art and framing supplies, but an extensive career in floral design has meant Null is well-equipped with tools needed to repurpose frames and mount canvas.
Photo by: Jan Swoope/Dispatch Staff 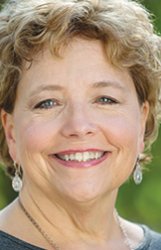 In March, Ralph Null was making plans to see more of the world. He is an avid seasoned traveler. Instead, a global pandemic sent him only as far as the small studio at his riverside home in Columbus. But that was far enough. Far enough to reignite a genuine enjoyment of painting, to discover new expression, to create more than 150 acrylic artworks in a few focused months.

"I've been painting like crazy because there's nothing else to do," said Null, most well-known as an internationally-recognized leader in floral design. "You've got to do something in a pandemic or you really suffer mentally, so my whole approach has been that this has been for my own mental health."

One can only watch so much TV, he noted.

"And heaven knows social media will make you want to jump off the Tombigbee River bridge if you do too much of that ... " said the Mississippi State University professor emeritus. Painting became an immersive opportunity to control a lot of unexpected free time.

"It's also turned into a real learning experience as well because I've worked every day at it," Null explained. "When you start a process or method or style that you aren't familiar with and you work through it, maybe you're not real happy and you do another one, and maybe on the third one you get that 'ah-ha' moment when you've figured out the methodology or technique."

Although Null has painted periodically for several years, this focused intent was a new and motivating experience.

"I felt every day I was gaining something out of it," said the painter.

When the Columbus Arts Council learned of Null's prolific pandemic therapy in the studio, the gallery committee invited him to share the results with the public. About 70 hanging works and another 90 or so "smalls" will be featured in an exhibition throughout September. It opens with a reception Thursday from 5:30-7 p.m. at the Rosenzweig Arts Center at 501 Main St. Null will present an overview of the collection. He will also later conduct informal "art stroll" talks that explore specific portions of the show. On Sept. 8 at 6 p.m., he will talk about his botanical paintings. On Sept. 11 at 11 a.m., focus will be on his impressionistic works. On Sept. 22 at 2 p.m., learn more about his landscapes.

"The impressionistic is probably the area that I really have stretched myself and had the most amount of growth, in that it's so important that you learn control, when less is more ... " he observed.

A June visit to the Mississippi Museum of Art in Jackson during the hanging of the current Old Masters exhibit proved enlightening. In his lifetime of travel, Null has spent untold hours viewing acclaimed artworks.

"But I was really looking at them from a viewer's perspective, rather than a doer's point of view," he remarked. The day in Jackson was different. There were very few people about.

"I spent most of my time looking at the paintings up close, looking at technique, approach and how things were done," Null said. "It was very illuminating versus standing 10 feet away in a crowd looking at the finished product. That was really a delightful experience for me."

Studying the revered masterworks had an impact.

"Looking at how brush strokes express certain feelings and emotions, it brings forward that it's all the brush. You're just holding it, and the brush is the way in which the expression occurs."

The pandemic generated more than just free time for Null. It also triggered shortages of art and framing supplies as shipments from China and elsewhere were disrupted.

"People don't realize that during all this, there's a real shortage of art supplies, even paint colors," Null noted. "Most of the art supplies come out of China, and everybody cooped up at home is doing art."

With resourceful skills born of years of creating show-stopping floral designs for everything from White House state dinners to Saks Fifth Avenue, Null took saw and hammer to repurpose frames purchased at estate sales and thrift stores. He stretched cotton duck to make some of his own canvases. Every piece of art in September's show will be ready to hang. While some canvases measure as large as about 3-by-4-feet, the majority of the exhibit consists of small works. Notecards featuring images of some of the new paintings are included as well.

"Ralph is a longtime, generous supporter of the arts council," said Jan Miller, Columbus Arts Council executive director. "Not only is he a treasure to us but also to the community. We feel honored to display his amazing work and are proud to call him a friend."

Ralph Null's career in floral arts and retail floriculture has taken him around the world, from London to Tokyo, to awards, to leadership of the American Institute of Floral Designers and to his design work being featured with the Smithsonian Institution. But the pandemic of 2020 sent him into the little studio in Columbus where he was reminded there is always something new to discover.

"You can surprise yourself," he said, "with what comes out of the brush."