In the garden with Felder: Pretty -- and tasty 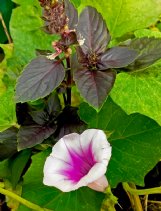 I had an unexpected pastel delight in my veg patch this week, when my sweet potatoes started flowering. As luck would have it, one vine had crept around a purple-leaf basil whose small edible flowers share the same pink throats.

I had planted them both partly for good eats and partly because they are, well, pretty plants. Multiple benefits are important in small gardens where detail is everything.

Every year I stick out ornamental sweet potatoes, both the purple leaf and chartreuse kinds, mostly as ornamental ground covers or for spilling out of large containers. And they do make small, irregular but edible tuber roots.

Anyway, this year I took advantage of stay-at-home orders to plant more vegetables than I usually do; most years I travel abroad and depend on stuff that doesn't need close attention or regular watering, and depend on those that generally fare well on their own and blend well with low-maintenance flowers and shrubs.

The easiest summer veggies that I plant as much for looks as food include gourds, several different colorful peppers, and okra, with its simple hibiscus flowers and ornamental pods; I always plant the kind with burgundy leaves and pods.

But this spring I set out scattered potager-style patches of others, including small stands of corn tied up with climbing Louisiana purple pod beans and underplanted with squash. This ancient "three sisters" combination looks good texture-wise and produces well. And I interplanted with regular sweet potatoes as a groundcover with a superb fall harvest.

White-fruited eggplant would be fine, too, but I feel guilty not eating them. Sounds heretic, but I simply dislike the big berry's "mouth-feel" -- but then I really can't stand slimy okra either; thank goodness for cornmeal, hot oil and ketchup! Don't like mushrooms either, and nope, you can't change my mind.

My favorite culinary herbs for double duty as flowers include several different basils, oregano, chives, both shrub and cascading rosemary, and the perennial marigold called Mexican mint marigold or sometimes Mexican tarragon because its anise-flavored leaves are an excellent substitute for nearly impossible-to-grow French tarragon. The native Mexican perennial marigold is so drought-hardy, and because its brilliant yellow flowers appear just in time for Day of the Dead celebrations, it's commonly planted on Latino graves.

With my three sisters pretty well played out now, last week I reworked their spaces and started planting fall stuff. I sowed a packet each of carrots and beets, knowing full well that the seeds cost more than I spend all year on those inexpensive foods. With a daily sprinkling they came right up in the warm soil. In a couple of weeks, I'll thin the plants, using the pullings in salads and leaving elbow room for the leftovers to reach their potentials; overcrowding is one of the easiest production-busting mistakes new gardeners make.

But I left room for seeding colorful lettuces and other greens in a couple of weeks, and for transplants of other cool-season veggies such as broccoli, cabbage and the like. It's nearly time.

But back to the pretty part. The big flowers of sweet potatoes prove that they are in the same family as morning glories, and look all the world like those old-fashioned reseeding petunias with pale lavender, pink and white flowers that smell so sweet.

And to have mine flower alongside basil, the flowers of which are also white with pink tinges, was unplanned lagniappe.

So, my summer experiment has segued into fall, and soon, with the addition of garlic and winter-hardy parsley, into winter and next spring. This forced stay-at-home is turning downright productive.

Felder Rushing is a Mississippi author, columnist and host of the "Gestalt Gardener" on MPB Think Radio. Email gardening questions to [email protected]