Food for the soul: Casserole Kitchen adapts to continue its mission 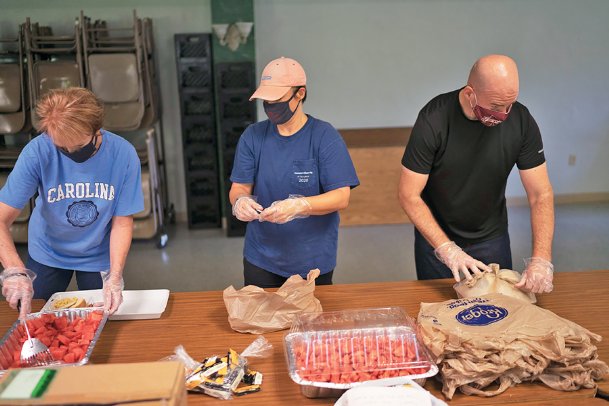 Angella Baker of Starkville Community Church, left, and Angelia Knight, a Mississippi State volunteer, plate food for people in need of a meal Saturday at the Episcopal Church of the Resurrection in Starkville.
Photo by: Antranik Tavitian/Dispatch Staff

Key to navigating these months of global pandemic has been adaptability. It's been vital for the workplace -- and in nonprofit organizations as well. Everywhere, heads and hearts behind charitable efforts have had come together to find a way. That's true at the Casserole Kitchen in Starkville. For the past 11 years, churches and other volunteers have collaborated in the mission of serving a hot meal three times a week to anyone in need, at no charge. Originally established at Starkville's First Presbyterian Church, the program has been based at the Episcopal Church of the Resurrection for the past two years.

Until March, guests coming for meals were able to sit down, dine together at tables and share a bit of fellowship.

"But we've adapted a lot over the past few months," said Rex Buffington, who co-leads the outreach ministry with Loren Zimmerman. By now, the necessary format is familiar: no more coming inside to sit down, no more long chit-chat over a plate, no more handshakes or hugs. But the smiles are still there, even if they are behind masks as volunteers give out meals in to-go boxes from a table at the church parish hall door.

An all-volunteer core of 17 churches, as well as groups such as Starkville Kiwanis, Wesley Foundation and various departments of Mississippi State University participate in the community ministry that currently offers to-go plates Tuesdays and Thursdays at 5:30 p.m. and Saturdays at 11 a.m. from the hall.

"It's for anybody who is hungry," said Buffington. "We really feel like the people who come are people who need that help, and we're really glad to be able to be there to give that help."

Meals are prepared in anticipation of approximately 40 people.

"We have all different ages, and we have some families with young children that come, and we have a lot of senior citizens that come," Buffington said. "Lately, we've been seeing a little increase in our numbers, over the past month especially."

On Saturday, 50 meals were served.

When COVID-19 disrupted operations in the spring, organizers were at first concerned about being able to maintain the Casserole Kitchen uninterrupted.

"We didn't know exactly how that would work because a lot of the people on our church teams were older or vulnerable," Buffington said. But volunteers adapted. Cooking is done in homes and dropped off at the church on designated days. There, a fairly constant team of volunteers experienced in safety protocols plate and serve.

"We try to have plates ready so as soon as people arrive, they can take it," the co-leader explained. "We're trying to not have people stand in line or be close to each other."

Angella Baker of Starkville Community Church has volunteered since mid-March, answering a call put out by a friend on Facebook.

"I like to stay busy; I immediately said I wanted to help," she said.

On Saturday, Baker helped organize plates, plastic ware and water bottles (one goes out with each meal), and assisted in plating hot dogs, baked beans, mac and cheese and desserts. This coming weekend she will head the meal prep committee: Spaghetti, Caesar salad, garlic rolls and dessert are on the menu.

"It's always a main course and a vegetable or salad, a grain, usually a roll, and a dessert," said Buffington. Yesterday's group prepared lasagna. Sometimes teams make fried or baked chicken, or ham.

"People get real creative with their cooking," Buffington remarked.

As with many nonprofits, Casserole Kitchen is seeing expenses inch up. Even though it's an all-volunteer mission, supplies like to-go plates have increased in cost. In addition, on the rare occasion they have more guests than expected and run low on food, the ministry would like to have fast-food gift cards to give out rather than turn someone away empty-handed and hungry. Anyone wishing to make a donation may mail it to the Episcopal Church of the Resurrection, 319 University Dr., Starkville, MS 39759. Be sure to designate it for Casserole Kitchen on the memo line.

Appreciation from meal recipients is all the reward volunteers like Baker need to stay motivated.

"They're very grateful; they thank us profusely," she shared.

Buffington said, "I'm so thankful that we've been able to continue to provide meals because that's been really important during this time. ... The one thing I really miss that we don't have during COVID-19 is I've always felt like the fellowship, along with the food, was really important. We don't really have that right now, but we're so glad that we're able to continue to feed people."

The Episcopal Church of the Resurrection is located at 105 N. Montgomery St.; follow signage to the parish hall.