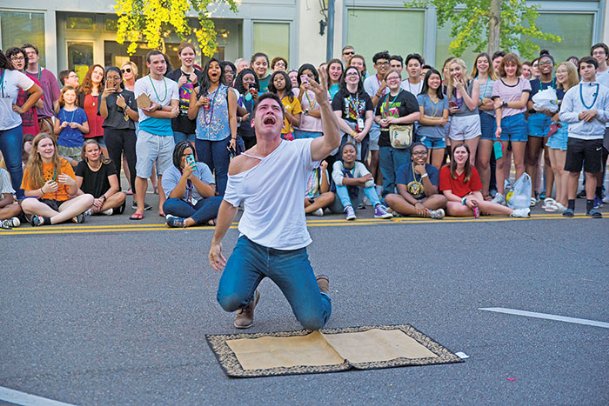 With six weeks to go before the planned 19th annual Tennessee Williams Tribute in Columbus, organizers have decided to make it a virtual celebration. The festival, founded by Brenda Caradine, traditionally explores all things Tennessee. The late two-time Pulitzer Prize-winning playwright and poet was born in Columbus March 26, 1911. His first home, now at 300 Main St., serves as the city's welcome center.

Not knowing what COVID-19 guidelines for in-person gatherings will look like by Sept. 10-13, the tribute's original dates, the TWT board of directors are instead developing an informative, entertaining condensed fest that will begin at 10 a.m. Saturday, Sept. 12 on Facebook Live. At present, it is expected to last about two hours.

"We were very close to just canceling altogether because we just didn't know (what conditions will be), but this is our 19th year, and we really hated to break that line of having something every year," said board member Keith Gaskin.

Once the decision was made, participants enthusiastically got behind it.

"We got excited about it," said co-organizer Mathalie Porter. "All the people that we usually work with have been just super."

A popular highlight of the tribute is the Hollyhocks Stella Shouting Contest. Shouters are traditionally invited to channel Williams' character Stanley Kowalski from "A Streetcar Named Desire" and yell their best "Stella" before spectators downtown.

"We're still going to have the contest this year -- but virtually," said Porter. "It will be a little different, but it will be fun."

Video entries are due by Aug. 22 to [email protected] Two categories, for adults and for children 12 and under, are available. Shouters are judged on loudness, dramatic ability and costume, if one is worn. The winner, announced during the Facebook Live event, will have his or her name added to a perpetual plaque.

"And we're putting a gift package together," added Porter.

Some of the shouts will be shared during the Sept. 12 virtual fest.

Board member Christopher Blank and 2020 Tennessee Williams Tribute Scholar T.K. Lee will host a Facebook experience that includes a visit from "Tennessee" himself, in the form of actor Brent Davis. The social media event will also include a scene by area acting talents Daniel Talley and Laura Beth Berry, said Porter, as well as a presentation by Steve Pieschel.

"Steve is one of our past scholars, and he's going to do a short talk on Tennessee Williams under the shadow of the 'lost cause' culture," said Gaskin, noting there are correlations to America's current national discussion.

"This is a historical time in our country, and I'm really excited about Steve's talk."

A filmed original short play by local actor and educator Spence Andrews features Andrews, as Tennessee, and Edwina Williams (Mother Goose) as his mother (who was actually named Edwina Williams).

Andrews' "Blue Mountain Memories" draws from Tennessee's "The Glass Menagerie." This year marks that play's 75th anniversary. Andrews diligently researched the playwright for this project that incorporates references to Columbus, including Tennessee's 1950s visit to the city of his birth.

The virtual fest will also present a poetry tribute, with 10 Southern poets reading some of Williams' works, as well as their own.

"And actors that always support us from New Orleans are filming something from there," Gaskin added.

Not to be overlooked, a major announcement will be made on Facebook Live Sept. 12 about a new collaboration for 2021 between the Tennessee Williams Tribute and Mississippi University for Women, said Gaskin.

In the face of the pandemic, the 19th annual tribute is adapting.

"This is an important event for Columbus. ... Tennessee Williams is an international figure, and there are a lot of towns that would pay to be able to say it's his birthplace," remarked Gaskin. "We're committed to keeping it going and hope to gain even more (fans) through this virtual event."

1. Designing for the future: Local citizens are among many with ideas for a new state flag COMMUNITY

4. In the garden with Felder: Gardening with a little help from a four-legged friend COLUMNS