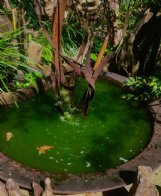 An algae bloom turned water in this feature in Felder Rushing's garden as green as a leprechaun's waistcoat. The water feature was created using an antique cast iron sugar kettle.
Photo by: Felder Rushing/Courtesy photo

A garden is good for many things, including amusement, especially for those who have an appreciation of the absurd.

Mine is more than a never-ending Mobius strip of chores for keeping flowers, herbs and vegetables coming all year, though this week I'm planting more summer veggies for fall harvest.

But this week I don't know which was funnier to me, having a water garden turn so pea-soup green even the frogs wouldn't swim in it, or rescuing a baby opossum that I found trapped waist-deep in a bucket of overripe figs.

My main water garden is a large antique cast iron sugar kettle with a central fountain and sculpture. No plants, no fish, just an attractive, splashy white noise focal point in the garden, set amongst Spanish moss-draped stumps and lots of ferns and hostas.

By day there's a queue of thirsty birds and butterflies, and lizards poised to pounce; it also attracts dragonflies, which I learned to catch by my young daughter who I found wandering around the garden with one perched on a stick like they do on the ends of fishing poles. After dusk it becomes a crucial watering hole for 'possums and raccoons, and a courting place for toads and noisy little tree frogs.

The water feature's only maintenance is an annual cleaning to remove settled gunk from fallen tree leaves, a twice-yearly rinsing of the pump filter, and an occasional topping off to replace evaporated water.

That is, until it got hot recently. Because it's in a midday sunny spot, the heat, coupled with no plants to shade the water, fomented an algae bloom, turning it green as a leprechaun's waistcoat. It was so vivid I wanted to celebrate it.

I could have bought some algaecide from the pond supply store but wanted fast results, so instead I poured in some chlorine bleach (which had I any fish, they would have gone blind), but it just turned the water brown. So I ended up just bailing it all out and starting over with fresh water. Fish would have needed to be kept overnight in a bucket of water until the tap water chlorine evaporated.

One of the easiest ways to reduce algae is to plant lots of aquatic plants that cover most of the water surface, but why go to the trouble to create a water scene and then hide it? Might as well just stick regular plants in dirt in the first place.

I recently set up another water feature beside a backyard deck where I spend a lot of time staring into a fire, even on warm evenings. It was easy, just a smaller iron cooking kettle with a water pump and fountain to make splashy sounds closer to where I sit. Because it's in the shade, there's no algae, and the moving water from the fountain prevents mosquito larvae.

The other humorous incident followed my cooking down a couple dozen jars of preserves from fresh-picked homegrown figs. To me they are worth their weight in gold -- one of the prime benefits of summer gardening in the South.

But that night I set a plastic bucket of overripe figs and trimmings outside the door, and the next morning I was surprised by a hissing baby 'possum that was all but swimming in the sticky muck churned up by his going around and around all night. I had to fish out the possum and hose it down in a separate bucket to get the fig goo and fruit flies out of his fur.

Maybe I shoulda just chucked the 'possum into the fountain.