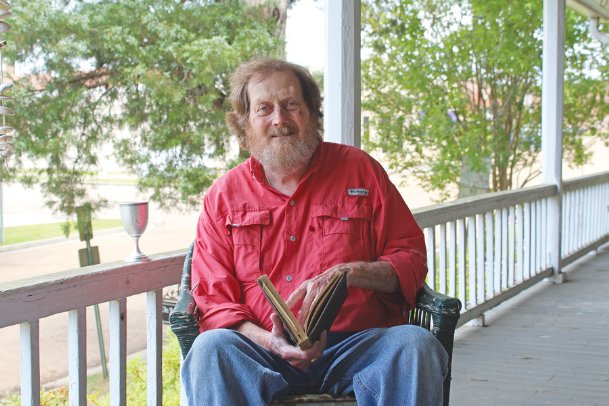 Rufus Ward relaxes on the porch of his circa 1825 Columbus home Ole Homestead Monday while looking through his grandmother Mrs. T.C. Billups' 1916 copy of the New Orleans Times Picayune Creole Cookbook. The original cookbook was published in 1905. With Memorial Day coming up, Ward takes a look back at a Southern art form - barbecuing, and the all-important sauces. Photo by: Jan Swoope/Dispatch Staff

Barbecue is derived from the Spanish term baracoa which is said to have originated in the Caribbean as a word for the Indian practice of cooking meat over an open fire. Pictured is an 1837 copy of de Bry's c 1590 engraving of Indians in Florida cooking.
Photo by: Courtesy image

Sam Harris works his barbecue magic with pork and lamb on the pit at Magowah in this 1959 Birmingham News photo.
Photo by: Courtesy photo

Rufus Ward/Special to The Dispatch

People in the Black Prairie have always taken pride in their history and their barbecue. Backyard barbecues or picking up a slab of ribs from a barbecue stand always make for a delicious meal. Very few, though, realize how close history and barbecue are tied. Barbecue is derived from a Spanish term for meat roasted over an open fire. The Spanish term baracoa is said to have originated in the Caribbean and derived from a word for the cooking over an open fire practices of Indians there.

The Spanish heritage runs even deeper. In December of 1540, Spanish explorer Hernando de Soto crossed the Tombigbee River in the Columbus area. De Soto had with his expedition over 300 hogs that were used for a supplemental food supply. Their dining on roasted pork near the Tombigbee in December 1540 would have been the first recorded pork barbecue in what is now Mississippi -- and was probably the first Christmas dinner served here.

It was in 1697 that we see the first use of barbecue in English. That was by William Dampier, an English buccaneer. The word buccaneer was first used in referring to Europeans who dried and smoked fish in the manner of Indians in the Caribbean. Since many of those were French or English pirates preserving meat for their voyages, buccaneer became another word for pirate.

An article in the Columbus Southern Argus in 1839 told how: "A custom prevails in the South Western States to give Barbecues to candidates for office, so that the people have an opportunity of learning from them their political views." The account went on to describe how "barbecued Pig and Lamb" would be served. Today probably the most noted barbecue in the Columbus area is served at the 114-year-old Magowah Gun Club, and the tradition of serving both "pig and lamb" continues there.

The earliest locally-used recipe that I have seen is in an 1825 copy of "The Virginia House-Wife" that has been passed down through the Govan family of Holly Springs and the Billups family in Columbus. It is: "To Barbecue Shote." This is the name given in the Southern states to a fat young hog, which, when the head and feet are taken off, and it is cut into four quarters, will weigh 6 pounds per quarter.

"Take a fore quarter, make several incisions between the ribs, and stuff it with rich forcemeat; put it in a pan with a pint of water, two cloves of garlic, pepper, salt, two gills of red wine, and two of mushroom catsup. Bake it and thicken the gravy with butter and brown flour; it must be jointed and the ribs cut across before it is cooked, or it can not be carved well. Lay it in the dish with the ribs uppermost; if it be not sufficiently brown, add a little burnt sugar to the gravy."

A tasty way to look at the history of barbecue is to explore the history of barbecue sauces. When examining the history, one finds regional prejudices as strong as any opinion of Ole Miss, MSU or Alabama football. I once came across a nationally published article claiming that Memphis barbecue sauce was just a higher-vinegar content variation of the classic Kansas City sauce. I know an awful lot of people, including myself, who firmly believe that the Kansas City sauce is just a sweet, high-tomato content imitation of Memphis sauce.

Be it with pork, chicken, beef or lamb, everyone has their favorite barbecue sauce. Early history of that sauce is as cloudy as the sauce itself. A major problem with tracing the early history is that, until the early 1900s, few cookbooks included any recipes for it. The 1849 "Modern Housewife" listed recipes for 62 sauces, but not one of them was what we would consider a barbecue sauce. Barbecue sauce, as we know it, has not been around that long.

When an early sauce is found, it is generally what we would use as a basting sauce. In the 1800s, barbecued meat usually referred simply to meat roasted over coals and seasoned only with salt, pepper and its own juices. The earliest date I have found for a true commercial barbecue sauce was 1909. It was probably the 1940s before commercial sauces were common.

The best way to trace the barbecue sauces used in our area is by the recipes that were used in Columbus. The earliest cookbook used locally that I have seen is "The Virginia House-Wife" from 1825. Its recipe is more of a baste than a sauce and calls for the above-mentioned pint of water, two cloves of garlic, pepper, salt, two gills of red wine and two gills of mushroom catsup. It may be thickened with butter and brown flour."

Sally Govan Billups' cookbook, dated Sept. 16, 1867, has a sauce recipe that calls for "very strong seasoning of vinegar, salt, red and black pepper, and three quarters of a pound of lard or butter. Baste the pig using a mop."

The 1875 cookbook "House-Keeping in the Blue Grass" suggests a Wine Sauce for Roast Meat which contains wine, jelly, butter, sugar and allspice, but no sauce close to what we would call a barbecue sauce.

"Breakfast, Luncheon and Tea," another 1870s Billups family cookbook, not only does not have a recipe for barbecue sauce, it doesn't even include a pork recipe. It does include recipes for many other meats, domestic and wild. This is probably because years ago many people considered pork to be an undesirable meat. In "Practical Cooking and Dinner Giving," which was published in 1888, the author said, "I confess to having a decided prejudice against this meat (pork), considering it unwholesome and dangerous."

A more recent recipe for Southern barbecue sauce was recorded by Eudora Welty in 1939. She told of Aberdeen's famous barbecue parties given by James Acker at his home, The Magnolias. His barbecue sauce recipe was: "Heat together 4 ounces vinegar, 14 ounces catsup, 3 ounces Worcestershire sauce, the juice of 1 lemon, 2 tablespoons salt, red and black pepper to taste and 4 ounces butter. Baste the meat constantly while cooking."

Many think the Southern barbecue tradition reaches its height at Magowah Gun Club in the Prairie south of Columbus. It was founded in 1906. Their old sauce recipe contained more than 15 ingredients and was simmered in a cast iron kettle.

This is the club's 1940 barbecue sauce recipe, which serves 100: Ingredients --A pound of chopped onion; 4 pounds of fat, bacon or ham, melted; 2 quarts of vinegar; a quart of water; a pint of mustard, prepared; 1 1/2 quarts catsup; 4 ounces of brown sugar; salt; red pepper; chili powder (optional); and 2 ounces of Worcestershire sauce, (optional).

John Carson shared with me the Magowah sauce recipe used by longtime Magowah cook Joe Buchanan (for 550 pounds of meat). It is typed with handwritten notes on "Sykes Plantation & Store" stationary dated Aug. 8, 1968.

In the 1970s and 1980s Walter Brown was chief cook, or "pit master," at Magowah and had been cooking there for about 40 years. While serving on committee around 1978 I sat down with Walter as he was making the barbecue sauce and wrote down the ingredients he used. I well remember him not measuring but just dumping each into the cast iron pot that sat over an open fire behind the pit. The sauce he made was the 1968 recipe with some additions. He would squeeze fresh lemons in it and then drop the lemon into the sauce to cook with it. He also added to the recipe white pepper, tomato juice, oregano, chili powder, two additional garlic buttons, parsley, cloves, onion, celery seed, seasoned pepper and some water. It was simmered in a cast iron kettle over an open fire for three or four hours. The barbecue pork and lamb cooked for 12 hours.

Today Jack "Junior" Hendrick is the Magowah "pit master." He first started barbecuing as a teenager in the 1960s. He carries on the Magowah tradition of the finest barbecued lamb and pork to be found anywhere. The base of his sauce is vinegar, black pepper, hot sauce, catchup, tomato paste, garlic, cayenne pepper and butter.

Barbecue sauce recipes are sort of like opinions: Everybody has their own, and that's one of the things that makes barbecue not only tasty, but interesting.

Rufus Ward of Columbus and West Point is a local historian. Email reaches him at [email protected]

(The salt and oleo is enough for basting all meat while cooking. Use the butter for making sauce to mop the cut up meat.)

3. Fire up the grill for smoked fruit FOOD