In the garden with Felder: The nature of plants 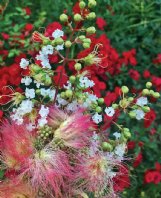 To hear some folks talk, you'd think plants have intentions, good or bad and everything in between. Ain't so.

Any school kid can rattle off dozens of plants that are directly beneficial to humans or wildlife, and anyone allergic to poison ivy, grass pollen or lawn stickers can name a few that cause problems to humans. They aren't doing these things because they are virtuous or evil, they are just doing their plant things.

Sure, plants respond or react to certain stimuli. But, unlike sentient creatures, they don't plan ahead, or do things with us in mind. They don't hold grudges, aren't moral, or noble, or out to get us.

Some, including lawns and weeds, require us to do certain things whether we like it or not; sometimes we aren't even aware of it. As examples of the latter, consider roses, basil, Africa violets and lawn grasses; none would be in gardens without our direct involvement.

Because they can't survive for long on their own, or procreate naturally, without beauty or usefulness they'd never show up in the first place. As Michael Pollan explained in his "Botany of Desire: A Plant's-Eye View of the World," many plants use us like human bumblebees to get around.

Of course, leading to my main point about the values we assign to plants, some get out of hand pretty quickly and invade their surroundings, often becoming inconvenient to us or destructive to natural habitats.

But it doesn't matter their country of origin. Imported kudzu, privit and aquatic parrot feathers are called "invasive exotics" and banned for sale, but for some reason we don't also forbid oak trees, though because of their proclivity to spread by acorns, they are the bane of my flowerbeds and would quickly destroy my sun-loving flowers and vegetables. And crack my sidewalk.

All this came to mind on a neighborhood walkabout the other evening when I noticed the first flowers of the season on both crape myrtles and mimosa. One, highly treasured and planted all over the place; the other, because it comes as it pleases, is considered trashy.

Because of their beauty, both were introduced in the late 1700s to North America by French horticulturist Andre Michaux, and quickly made the garden rounds, becoming popular mainstays for two centuries.

The mimosa, whose Latin name means "silk flower" (I think the pink and white balls of fluff are actually flamingo larvae), has taken upon itself to spread itself around a bit. My grandmother planted four o'clock flowers beneath the pair in front of her modest house, and I spent a childhood climbing them, playing with the seedpods and making glider airplanes from the leaves.

The rather short-lived trees, with flowers making gloppy messes of anything underneath, spread from there by seed, making them garden pariahs. But I've found an easy, unique way around this. Middle of summer, soon as hummingbirds and bees are done with the sweetly fragrant flowers, I cut the tall stems close to the ground before they set seed. New shoots quickly spring right back out in towering fernlike clumps, adding beauty and grace without spreading everywhere.

Crape myrtles, on the other hand, have to be propagated, shipped, sold and planted, one at a time, by humans. Yet they are everywhere, by the millions. It could be said that, like azaleas, they are invasive because they are so common, and every single one displaces a native plant. And unless you consider spider mites, aphids and bark scale, which drip sticky, black mold-covered sap, they have very little ecological value.

Which is good, and which is bad? Both. Neither.