It's a 'snap': One Lowndes County couple opts for something a little different 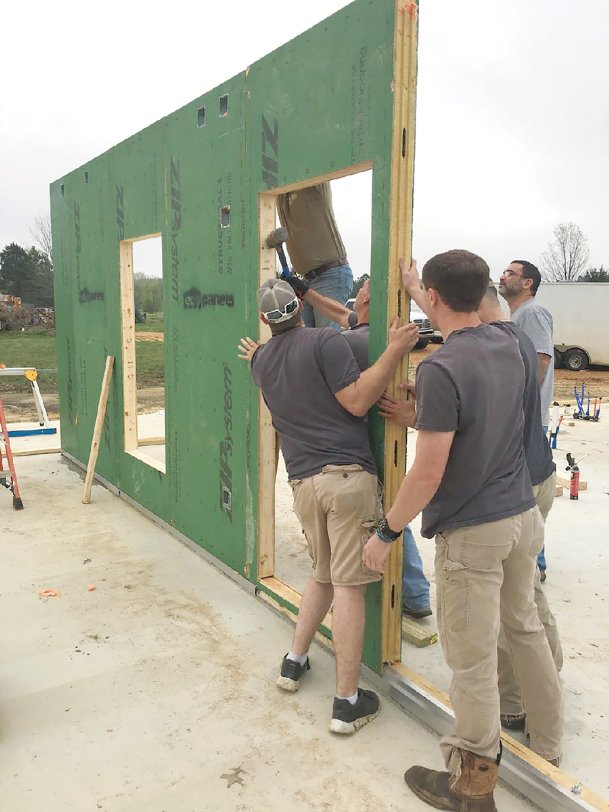 Structural insulated panels made off-site to specifications started going up Wednesday at the site of Victor and Mavis Unruh's new house near Highway 45 Alternate in Lowndes County. The bottom floor walls of the two-story home, complete with doors and window openings and electrical box basics, went up in about eight hours. Some might call it a "snap together" house. Photo by: Courtesy photo 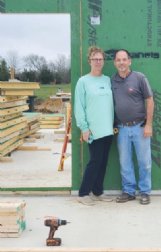 Mavis and Victor Unruh are pictured Wednesday on the site of their new home build.
Photo by: Courtesy photo

From bare slab in the morning to first-floor walls completed by the end of the day Wednesday on the Unruh's new 2,100-square-foot home.
Photo by: Courtesy photo

As the sun lowered Wednesday in western Lowndes County, Mavis Unruh stood back and marveled at the sight of something she's been thinking about for 20 years -- her family's new home going up. In this case, a home a bit out of the ordinary. What had been an empty concrete slab that morning eight hours later boasted the entire first floor framing of Mavis and Victor Unruh's future two-story dwelling. Some might even call it a "snap together" house. The speed with which it happened was due to a building material option the Unruhs chose. SIPs -- structural insulated panels -- are engineered panels used to construct walls, ceilings and floors, creating a multi-layer exterior sheathing, insulation and framing all in one piece.

The panels of rigid insulating foam core sandwiched between two structural facings were manufactured off-site according to specifications.

"We designed our own home plan and hired someone here to draw it out for us," said Victor. A truck from Eco-Panels in Mocksville, North Carolina, delivered the panels on site late Tuesday. By Wednesday afternoon, Mavis could walk through, envisioning the rooms she would be furnishing before long.

"I just couldn't believe that it was actually happening, after I'd waited so long," she said.

Victor is a self-described "long-term thinker." With near 30 years in the HVAC industry -- heating, ventilation and air conditioning -- he knows his way around energy efficiency and conservation. His research convinced him SIPs panels were right for his and Mavis' particular site. He liked the insulation R-value of the panels. Mavis was won over by extra sturdiness, in part due to single-piece corner panels. Her memories of straight line winds and tornadic storms whipping across their rural property are vivid. With three dogs, four cats and four birds to worry about when bad weather threatens, a stable structure is important to her.

"I wasn't sure about the panels at first because I didn't know anything about it 'til Victor started to tell me," Mavis said. "He's all about energy-efficiency, but I'm horrified of tornadoes; that's the real reason I got on board."

In the months leading up to Wednesday, the Unruhs sometimes had trouble explaining how their house would be built out of panels to friends accustomed to more standard construction. Victor came up with an analogy that seemed to click.

"Think about it as an ice cream sandwich. You have one layer on the outside and another on the other side, and then you have the good stuff in the middle," he said to illustrate the polyurethane insulation between two "skins."

"And with this, your windows and doors are already cut into the product," Victor continued. "All the electrical boxes and conduits to pull your electrical wires are already in."

Putting the first floor together Wednesday was "fast and pretty simple," said Victor, who worked with just a small crew. "It's like putting a puzzle together; every panel has a number and you put it together piece by piece."

Mavis was amazed at the lack of construction noise Wednesday, no recurring saws and little hammering.

On Monday, the second-floor exterior panels are expected to arrive via truck, then the roof. After all the SIPs panels are in place, a phase of more conventional construction begins as individual rooms take shape and are finished, and a reverse board and batten exterior and premium vinyl siding complete the outside.

In the Unruhs' build, SIPs construction will run approximately 3 percent more than a standard build, but Victor values the increased strength and improved energy efficiency, citing a comprehensive study on SIPs by the University of Colorado Boulder.

Building a new house is an exciting -- and sometimes hair-pulling -- adventure for anyone. The process can have homeowners second-guessing themselves. But by this past Wednesday evening, Victor and Mavis were satisfied with their choice.

"I thought it was awesome," said Victor.

His wife added, "I've been looking at house plans for about 20 years, and now it's happening. I was a little scared and have been apprehensive with all the coronavirus. But about the house, God's in control."

1. Those veggies and flowers you never had time to grow? Just look at us now COMMUNITY

3. In the garden with Felder: Staying occupied? COLUMNS

4. Local voices: Celebrating Easter in the era of COVID-19 COLUMNS