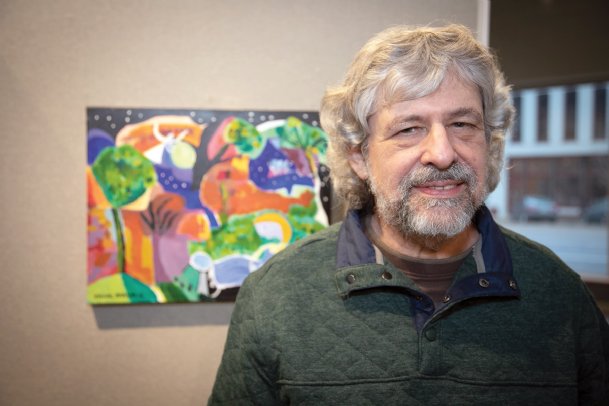 Frank McGuigan is pictured at the opening of an exhibition of his paintings at the Columbus Arts Council's Rosenzweig Arts Center in downtown Columbus Thursday. Vibrant colors and dreamlike narratives are celebrated in his artwork influenced by music, cats and the world around him. Photo by: Chris Jenkins/Special to The Dispatch 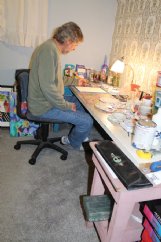 Frank McGuigan begins work on a new painting Wednesday in the studio at his east Columbus home.
Photo by: Jan Swoope/Dispatch Staff 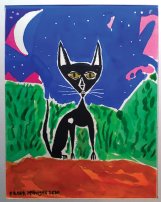 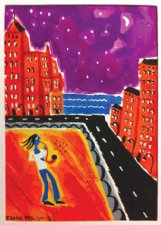 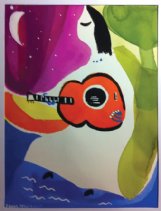 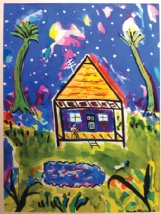 Spend some time with Frank McGuigan's paintings and soon his colorful world of whimsy seems like a pretty chill place to visit. Blue people, self-possessed felines and dreamlike settings fill the canvases he hopes will light up someone's day. Creating them is a calling he realized later in life.

"I was almost 40 years old before I really got interested in painting," said the amiable artist. He sat, relaxed in jeans and tennis shoes, in the studio space he's set up in his east Columbus home. Rows of paintings on the carpeted floor were propped against three walls. A long work surface covered with paints occupied the fourth. Jazz music played in the background. It's often playing these days when McGuigan paints.

"I love listening to jazz because it's so free and can loosen things up," he said. "It puts you in a good place."

McGuigan's journey toward that particular good place began when the Navy veteran started painting in the early 1990s. From the outset, his folk art style favored rich colors.

"I like really, really bright colors. It's all about color and space. It's kind of like putting a puzzle together," he said. Before long, McGuigan was taking his art to shows from Greenwood to Atlanta, including the Cotton District Arts Festival in Starkville and the Kentuck Festival of the Arts near Tuscaloosa, Alabama. In 1994, the self-taught painter decided to enroll in art classes at Mississippi University for Women.

"I learned a lot about color at The W. I've gotten more sophisticated about color than when I first began," he said. "I think certain colors evoke certain emotions, either warm or cold, depending on your mood."

McGuigan's preferred medium is gouache, an opaque watercolor. With it he saturates his canvases, building fields of color. He often has two to three paintings in progress, some of them commissions. Bold blues are frequently prominent.

"I think it goes back to the blues (music)," he mused. "I've always like the blues and so I make some of my people blue. ... A lot of my paintings have a musical theme in them."

Observant viewers will also notice recurring cats and roller coasters -- and occasionally, cats in roller coasters. Many of the cat paintings feature a feline he calls Blackie.

"The whole idea of Blackie evolved from an incident in the '90s," he explained. "It was Thanksgiving and our cat, Pooka, was glaring at us through the window while we were eating." That one occurrence stuck with the artist and has influenced a long line of his furry characters.

"I've been a cat lover all my life, so I incorporate my feline friends in my paintings," he said with a grin.

The roller coasters are rooted in his memories of growing up in Massachusetts and family car trips to the beach. One anticipated thrill for the kids was who would be the first to spot the familiar amusement park roller coaster on the horizon as they neared their destination.

McGuigan's paintings, however, often start out with no formed plan.

"I'll put down some fields of color, and it'll reveal itself to me by shapes and forms -- I'll see something and build from there," said the painter.

Minerva Gallery owner Tammy Carlisle of Starkville was impressed with McGuigan's work as soon as she saw it.

"Frank's paintings are so much fun. ... When I first met him, he just had this vibe about him that's so positive," Carlisle said. "The colors are so vibrant and have such a great, positive energy. I was drawn to that energy. It just has a happy vibe to it -- and so does he."

In addition to Minerva Gallery, McGuigan's paintings have been carried in galleries in Vicksburg, Oxford and Montgomery, Alabama, among others cities. Throughout February, dozens of his paintings are showcased in a Columbus Arts Council exhibition at the Rosenzweig Arts Center in downtown Columbus.

From his good place, McGuigan remains an explorer in a unique world of color and characters.

"I get the most satisfaction out of doing something new and fresh, just breaking away and getting out of my comfort zone," he said in the studio. "I also get a lot of satisfaction when people look at a painting and ask me, 'What does this mean to you?' I always say, 'What does it mean to you?'" Sometimes, he shared, people will reveal an unexpected perspective personal to them. That exchange of ideas or emotions, many would say, gets to the heart of art.

"I didn't choose art. Art chose me," McGuigan said. "People tell me the work makes them happy -- and that makes me happy, too."

Editor's note: See more of McGuigan's art this month at the Columbus Arts Council, 501 Main St., and on Facebook and Instagram. He can be contacted through his Facebook page, facebook.com/FrankMcGuiganArtist/.