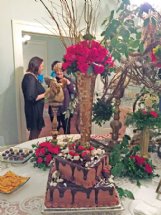 Specialty desserts and elaborate floral arrangements, like these at the 2019 event, are highlights of the annual Stephen D. Lee Foundation Valentine Party in Columbus.
Photo by: Courtesy photo

The Lee Home was completed in 1847 by Maj. Thomas Garton Blewett. The extensive home and grounds were the last home of Blewett's granddaughter and her husband, Stephen Dill Lee, who was instrumental in the establishment of Mississippi A&M, now known as Mississippi State University. Lee served as the college's first president.

Regina and Stephen Lee's son inherited the house and sold it to the City of Columbus for the use of the city school system, and the Stephen D. Lee High School was built on the square. The wings of the home and outbuildings were removed and the home was converted into the home economics building and school cafeteria.

After a fire destroyed the school in December of 1959, the Association for the Preservation of Antiquities in Columbus and Lowndes County met with city officials to prevent the demolition of the house and to request permission to restore it. The Association and The Lowndes County Historical Society combined to form the Stephen D. Lee Foundation and set about saving the historic house. Sixty years later the Foundation is still maintaining and promoting this outstanding example of Italianate architecture.

"All proceeds of the Valentine Party go to maintaining and enhancing the house so we decided that this 10th year would be a great time to show our supporters what they have helped us accomplish," said Foundation Chair Eulalie Davis. These accomplishments include a wheelchair ramp, new HVAC systems, a new roof, brickwork, painting, a kitchen upgrade and new window treatments.

"As usual, the best bakers in Columbus will provide beautiful and delicious sweets and savories, and fabulous flower arrangements will fill the house which will celebrate its 174th Valentine's Day," said Davis. She also added that there will be tributes to the Twenties to show that an old house does have some new tricks.