Empowered: Entrepreneurial women get a big boost from a new group 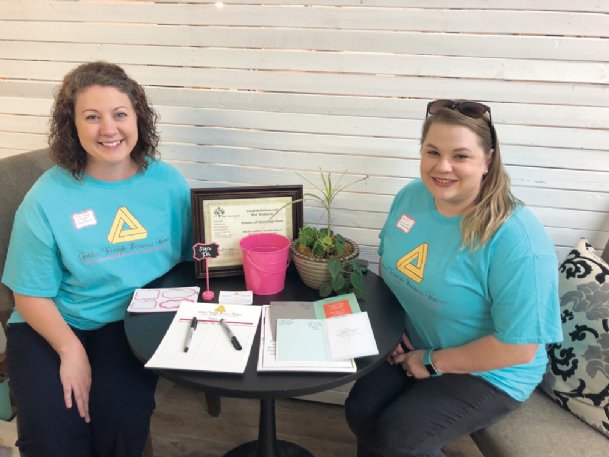 Golden Triangle Business Women organizers Misty McCraw of West Point, left, and Kaitlin Mullins of Starkville represent GTBW at a recent event in Starkville. The nonprofit group offers training resources and support to women throughout the area who own a small business or are interested in starting one. Photo by: Courtesy photo 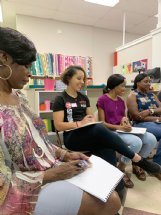 Golden Triangle Business Women members listen to a speaker at one of the group's monthly gatherings. Pictured, from left, are Sharon Jones, Patricia Cartwright, Rekeshia Lee-Williams and Tameshia Perry.
Photo by: Courtesy photo

It might be a form of business world karma that Misty McCraw and Kaitlin Mullins chanced to meet in 2019. It occurred first through their computers, when both were taking part in a national online entrepreneurs' group and McCraw, of West Point, posted a message asking if anyone in the network happened to live nearby. She received a response from just down the road -- from Mullins, in Starkville.

The more the two women compared notes, the more they realized their common ground. Both hold full-time jobs, McCraw in human resources at Columbus Brick Co., Mullins at Mississippi State University. They are also both owners of small businesses, or "side hustles." McCraw has Blue Magnolia LLC, an online store creating custom apparel and T-shirts. Mullins does custom monogramming and embroidery through her family's fabric store in Columbus, Magnolia Heirlooms; she also has an Etsy shop, Sew Sweet Tee Co.

The enterprising women began meeting periodically to talk over issues they had encountered in business and to use each other as accountability partners. Both had discovered there seemed to be few places locally for women to turn for resources to succeed in small business.

"So, we thought, why don't we try to start a group ourselves?" McCraw said. The result is Golden Triangle Business Women. The goal is to empower and connect women across the Golden Triangle area who own -- or hope to start-- small businesses. GTBW wants to create an environment that encourages women to live out their dreams of being entrepreneurs.

McCraw and Mullins set the first meeting for May 2019, not without jitters.

"When we first started this, we were kind of doing it scared," McCraw admitted. "We had no idea if anyone would show up for the first meeting. When we had five people come, we were on the moon!"

Since then, response has exceeded expectations. About 20 women now attend meetings the third Monday of each month in locations throughout the Golden Triangle. Most months feature speakers who share specific professional advice, from how to best utilize social media, to guidance from a CPA. The group is also steadily gaining followers on Facebook and Instagram from not only inside but outside the area, women who don't have access to a similar resource where they live.

"We have people at meetings from all different industries, from all three counties, people from in their 20s to in their 50s," said McCraw. "It's really an all-inclusive group no matter what stage (of business) you are, from people who just have a business idea and aren't really sure how they want to start that business, to people who have been in business for several years. They may be established but may want to try some new things."

Mullins said, "I think what I like most is just meeting with other women and knowing that other people are in my situation. And the resources that have been brought in have been really helpful to all of us."

"Part of (the benefit of the group) is just having someone else who understands being a small business owner. A lot of members are full-time employees, mothers, wives, and they have volunteer commitments, so trying to just juggle it all and still feel like you're accomplishing what you want to (is hard)."

By the end of 2019, several GTBW members approached the organizers to say they were eager for even more in-depth training. In response, the group, which holds 501(c)(7) nonprofit social club status, created a paid membership format that allows women to access weekly business training through a private Facebook page, to complement the in-person meetings. January's theme was goal-setting. Training can be shared through video sessions, live interviews or sometimes workbook type training. As an example, McCraw and Mullins recently created a PDF so members could complete a SWOT analysis -- an assessment of strengths, weaknesses, opportunities and threats, to help plan business goals for the next year.

Memberships are $10 per month, or $100 for a year. Those dollars offset costs of training supplies, the website, meeting refreshments, T-shirts and any expense involved in setting up at events.

"Every dollar goes back into the group in one aspect or another," said McCraw.

As the group grows, McCraw and Mullins hope to increase community involvement, including talking with youth groups about entrepreneurship. The two are, McCraw said, well-matched in personality to work together.

The first nine months for GTBW have been exciting, the organizers said. Feedback from members like Helen Reeves of West Point and Sharon Jones of Caledonia constantly remind McCraw and Mullins why the group was started.

Reeves is director of radiology at North Mississippi Medical Center in West Point, but she also wants to become a motivational speaker. She will soon launch a blog.

"I would never have done that if I hadn't started going to the meetings," she said. "It helped me narrow down what I wanted to do."

One of her goals is to help particularly women become better leaders, especially women who have come through difficult backgrounds.

"(The group) has been very inspiring. We've had a lot of speakers that have exposed us to ways to help grow your business that you wouldn't have come up with on your own," Reeves continued. "We've also had speakers that told us of their hardships and what they learned ... to help you meet your expectations quicker, avoid some of those trials and errors they've gone through so you don't have to repeat them."

Jones is general manager at Best Western Executive Suites in Columbus. The transplanted New Yorker is also involved in a nonprofit called Paroled2Pride, training non-violent felons to work in the hospitality industry. She used to be affiliated with a women's business network in Tupelo but was glad to find a group closer to home.

"It enhances me in my training and also enhances me at my work, to get new business ideas, to keep up with changes in business. I like the professionalism of the group and the accountability and moral support," Jones said.

Reeves added, "There's just a great camaraderie. It's a great place to be really open about what your fears and weaknesses are and not feel like you're exposing yourself, but that you're being uplifted in how to overcome those things."

McCraw and Mullins want to spread the message to women in the area with a passion or dream of owning their own business -- full-time or on the side -- that there is a group that wants to support them in any way it can.

"Being part of it is rewarding," Jones said, "just getting around those women who are successful and who are encouraging you to be successful, too."

1. A move for migraines: Detective work and a 600-plus mile move unlock a migraine mystery COMMUNITY