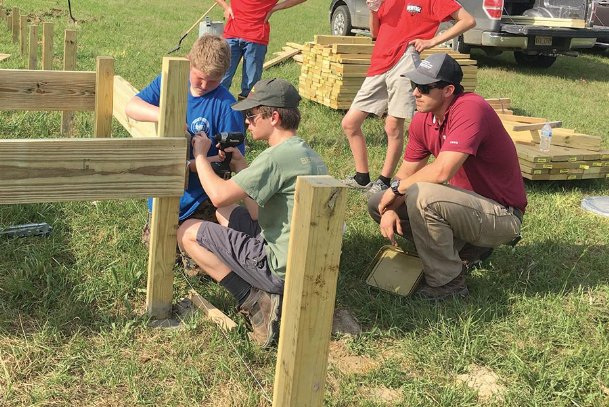 Thanks to an Eagle Scout project recently completed at Sunshine Stables, the therapeutic horseback riding center in Lowndes County is able to help people with physical, cognitive, social and emotional challenges strive toward independence. The service project chosen by Columbus Boy Scout Troop 2 member Nicholas Hairston was to build an adaptive mounting ramp for riders who may be in wheelchairs, on walkers or crutches, or who lack sufficient muscle tone or strength to get in the saddle from the ground. Now finished, the approximate 60-foot ramp built to American Disabilities Act standards is being put into use almost every day at the PATH (Professional Association of Therapeutic Horsemanship) International member center.

"It's been all the difference in the world," said Sunshine Stables founder and board president Anna Brown. "We've now been able to have our first official fall semester (of therapeutic riding) since becoming a nonprofit."

Hairston, who turned 17 while working on the ramp during summer, is a junior at Heritage Academy. Next week, he hopes to hear from the Board of Review evaluating his Eagle Scout Service Project final report, and to soon attain the milestone Eagle rank.

In early stages, as required, Hairston "wrote down everything about the project, including this is how I want to do it, fund it, get materials," he explained. "I started writing a detailed plan and got several people to review it."

Birks went on to explain that a primary goal in scouting is to develop leadership.

"The purpose of the Eagle Scout project is for the scout to lead; it's their job to plan what needs to be done, raise the money for materials, get a crew together, make sure they have all the tools needed, and to see their project through to completion," he said. "It gives a scout an opportunity to practice what they've learned, and to learn what it's like to be a leader, to learn all the skills necessary, how to communicate and how to handle unforeseen changes."

Brown was able to provide prepared plans for the ramp, and Hairston worked with New Home Building Supply in assembling required materials. Another major collaborator on the ramp build was Carson Miller.

"He's a fellow church member, the 'carpentry guy,' Hairston said. "He dedicated hours of his time to come out and help us."

The labor required many work days with "nearly the entire troop" over several weeks, plus several half-days with a smaller crew, said Birks.

The build was "a really well-done project," added the scoutmaster, who lives near the stables and sees the ramp being used on a regular basis.

After spearheading the project from start to finish, Hairston said, "I know I could not have done it if it weren't for wonderful people who were willing to help, through generous donations to actually coming out to work.

"I feel like I've learned a lot about growing up and being a leader, and how to take something from the small stages to the big stages. I knew when I signed up for this that it would be a hard project, but I wanted that challenge."

Hairston is the son of Trip and Dr. Bethany Hairston of Columbus.