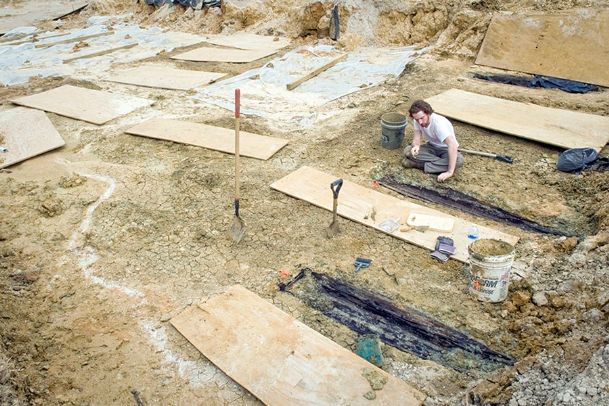 In this file photo, Forrest Follett of the Cobb Institute of Archaeology at Mississippi State University works at the Asylum Hill Cemetery site on the University of Mississippi Medical Center campus in Jackson, in 2013. The Asylum Hill Research Consortium is reaching out to the public for information that might help tell the stories of individuals who may be interred at the site. Remains from 66 exhumed graves are currently at the Cobb Institute in Starkville. The head of the Asylum Hill project, Ralph Didlake, will speak at the Columbus-Lowndes Public Library Friday at noon. Photo by: Courtesy photo 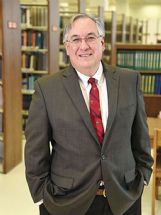 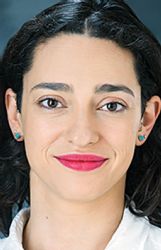 In this file photo from March 2013, Derek Anderson, left, and Forrest Follet from the Cobb Institute of Archaeology at Mississippi State, remove the soil from the lid of a grave at Asylum Hill Cemetery.
Photo by: Courtesy photo 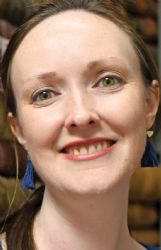 The coffins, made of pine, are decayed by time and clay soil. Simple wooden crosses thought to have marked each burial site have long since disintegrated. The mostly anonymous graves -- as many as 7,000 of them -- represent the final resting place of inhabitants who died at the Mississippi Insane Asylum in Jackson between 1855 and 1935 and were interred at the Asylum Hill Cemetery. Today, they occupy the only remaining undeveloped part of the main campus of the University of Mississippi Medical Center. In 2012, proposed construction brought the all-but-forgotten grave sites to the forefront once more. What to do about them -- and how to respectfully memorialize them -- is an ongoing and compelling story that reaches from Jackson to the Golden Triangle, and into every county of the Magnolia State.

An overview of that story will be shared in Columbus Friday, Oct. 11, when Dr. Ralph Didlake presents a free talk on the Asylum Hill Cemetery Project at noon at the Columbus-Lowndes Public Library. Didlake is the associate vice chancellor for academic affairs and chief academic officer for the University of Mississippi Medical Center in Jackson. He is also a professor of surgery and director of UMMC's Center for Bioethics and Medical Humanities.

After the graves were rediscovered in 2012 during construction on campus, Didlake saw a need for a diverse group of scholars and community members to oversee potential exhumations and to honor the experience of individuals who were patients during an important 80-year period in the history of medicine, mental illness and social institutions in the state of Mississippi. He formed the Asylum Hill Research Consortium (AHRC). Its members bring with them expertise in the fields of archaeology, anthropology, psychiatry, philosophy, bioethics, law, archives, preservation and more.

"I felt strongly that whatever got done had to be culturally appropriate and respectful of the individuals who were interred there," Didlake told The Dispatch.

Early on, he began to envision a memorial of some type. As the conversation went forward, the vision expanded.

"We started realizing almost immediately that this brought with it an opportunity to do a very meaningful project," Didlake said.

Exactly how many people are interred on the near-16-acre site in Jackson isn't precisely known.

"Archaeologists are telling us to prepare for 7,000," Didlake said. "We're highly confident that there are 4,000, because we have those records. We have burial records from 1912 forward, when the state of Mississippi started doing death certificates consistently."

Of those thousands, the remains of 66 people have been exhumed to date, from land needed for a roadway. Those 66 have a new resting place in Starkville, at the Cobb Institute of Archaeology at MSU. Exhumations were done in late 2012 and early 2013 with a team led by Nicholas Herrmann, Ph.D., then at the Cobb Institute. Graduate students and undergrads from MSU were part of the team.

Biological anthropologist Molly Zuckerman, Ph.D., is an associate professor in the MSU Department of Anthropology and Middle Eastern Studies. She is also a senior researcher at the Cobb Institute. Her research specialty is reconstructing evidence of health and disease from human skeletal remains recovered from archaeological sites. As part of the exhumation team and in curating the remains in her laboratory, Zuckerman has followed exacting preservation standards.

"One of the things we're very proud of is that the remains have all been cleaned and all individually stored in a highly secured facility in a way that makes certain that they are not mingled with other skeletal materials," she said.

All 66, presumed to be former patients, are from unmarked graves, with no existing record of which patient was buried in which site. It is "absolutely unfortunate," Zuckerman said, but remains are too degraded for DNA analysis with current available methods. What the institute has been able to do is determine age, biological sex and general health. Few, if any, personal items were found -- a few buttons and shroud pins. Using the science of dendochronology (dating environmental change by studying annual growth rings in timber) on the caskets, indications are that the exhumed patients were all buried in the 1920s and 1930s.

Study of the remains offers incredible opportunities to understand more about past disease and treatment practices, social history, conditions in the asylum and more. The project is spawning significant educational opportunities, too.

"It's been very exciting for our students," said Zuckerman. "We have students who come to MSU to work with these, a lot of them are coming from out of state. It increases our research reputation. ... It's a UMMC program, so it's great for the University of Mississippi and for MSU, for us to be a part of it."

Are you a descendant?

As the Asylum Hill Research Consortium progresses with gathering and reviewing historical documents related to the asylum and its patients, it hopes to hear from people who believe they may have a relative who might have been buried in the cemetery. Asylum inhabitants came from all Mississippi counties during a time when even cases of dementia or perhaps opioid addiction might have resulted in becoming a patient. History scholars want to gather stories and artifacts -- letters, diaries, photos -- that can shed light on life at the asylum. Documents would only be shared with express permission. A goal is to build a database available to researchers and to descendants in the future.

If you are a descendant of a patient who was at the asylum between 1855 and 1935 and would like to share information, visit asylumhillproject.org, or contact Lida Gibson at [email protected]

"We want to engage any descendant who has information about a patient or a staff member," Didlake said. "We would like to collect their stories."

The public can assist the project in another way, as well.

In January 2020, Didlake and the consortium plan to present a funding request to the state legislature to move forward.

"We need broad public support," he said. "These patients came from all 82 counties, and they cut across every conceivable demographic of our state. The history of the asylum spans some really important time frames in the history of Mississippi. It was here during the Civil War, Reconstruction, the Jim Crow era, the modernization of health care, the development of psychiatry as a profession -- so this is a platform to do meaningful historical work and meaningful cultural work for our state."

Archivist Mona Vance-Ali of the Billups Garth Archives at the Columbus-Lowndes Public Library added, "This is an opportunity for us to understand how our local community tied into the state history and into the history of mental health, and how that affects us now."

The project has what Didlake describes as a "very long time line."

"It will take us probably five to 10 years ... that's assuming we get the appropriate amount of funding," he said.

The envisioned memorial structure will serve two purposes -- as a memorial and also as a functional laboratory where carefully vetted scholars can study the curated remains. The MSU School of Architecture is partnering on design concepts already. Other resource partners in the Asylum Hill Cemetery Project include the Mississippi Humanities Council and the Mississippi Department of Archives and History.

"While we are not in a hurry, we don't want to waste time either," said Didlake. "We want to get this right."