In the garden with Felder: Keep an eye out for garden invaders 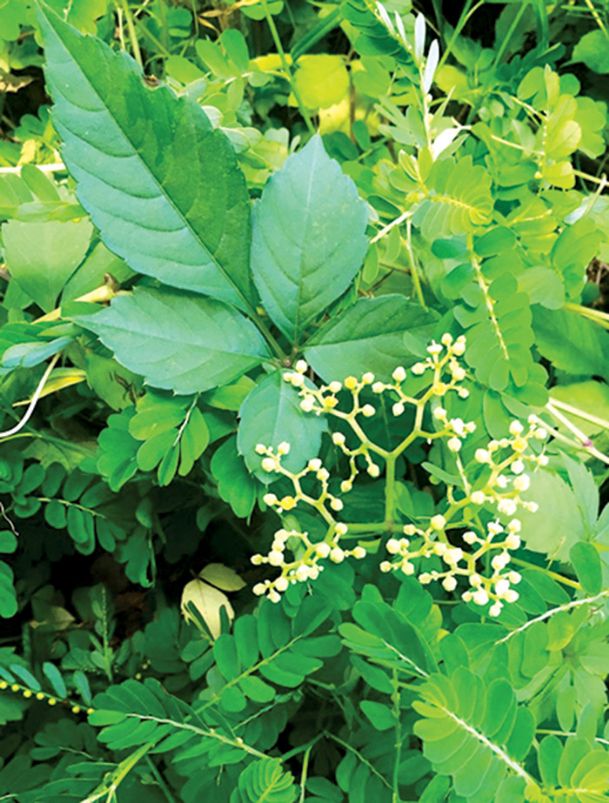 Invasive bushkiller and mimosa vine, both pictured, are two invaders that can try to take over the garden. Photo by: Felder Rushing/Courtesy photo

There's a scary new vine in my garden, a good contender for anyone who wants to come back in the next life as an unkillable weed.

Keep in mind that my idea of a weed may not be yours. Most folks think of "any plant out of place" and lump a lot of beautiful wildflowers and slightly invasive trees, shrubs and vines as weeds, even when they aren't actually causing problems in normally-tended gardens.

Me, I follow the larger world-view that a weed is "any plant having to deal with an unhappy human." Meaning me.

Non-native plants that spread readily are often vilified as 'invasive exotics" when some of our own natives can be real thugs. To me there isn't a big difference between English ivy and native Virginia creeper, or mimosas vs. native oak seedlings when either take over; just because a plant is native doesn't make it OK.

So my thinking is that any plant that comes up where I don't want it, regardless of its country or origin or potential beauty, is treated as an interloper and shown its way to the compost. My basic approach to weed control is pretty straightforward. I pull whatever I see as soon as I notice it, which keeps perennial weeds at bay control and kills those that sow seed before they have a chance. And in both spring and fall I do a general cleanup and heavy mulching to keep wind- or bird-spread seeds from growing deep roots. Occasionally I will squirt a little herbicide on poison ivy and bamboo from the neighbor's yard.

Still, over this wet summer a few unwanted plants, mostly grasses and a couple of others, managed to sprout in the mulch, but they were easy to pull because they were growing in just mulch. However, I found two alarming ones, which luckily I caught before they have had a chance to get established and spread.

One is named "chamber bitter," but most folks call it "mimosa weed" because it looks like little mimosa tree seedlings with tiny flowers and packed seed balls on the undersides of leaf stems. If ignored, each plant can quickly throw a forever's worth of seeds everywhere, to the point where no amount of pulling or spraying will get them under control. So regular, careful pulling keeps the few small ones that appear from maturing or dropping seed.

Same thing applies to Florida betony, nutsedge, bermudagrass, torpedo grass and others; get on top of them quickly and stay vigilant or they will get overwhelming.

But this week I also found a new perennial vine I had not seen before. It looks like native Virginia creeper, having five leaflets per leaf. But where the native vine has five equal leaves attached at one spot, this one has two pairs of two leaves, and a fifth one that is longer than the rest. It also has tendrils like grapevines which help it clamber quickly. In the fall it makes flat clusters of small orange or salmon colored flowers.

The Latin name of the Asian vine is Cayratia japonica, but its common name is chilling -- Bushkiller, for how it overwhelms other plants like kudzu. Once I identified it, I discovered it completely taking over the trees and shrubs of a neighbor, who said the more he pulls it the faster it comes back.

For now, I'm treating it like my other weeds, by pulling it every time I see it. Except I leave the pullings to dry in the sun for a few days so it won't be able to reincarnate in my compost.

2. Let us entertain you: Storytelling festival sparks imagination, laughter and maybe even a tear or two ENTERTAINMENT

4. Community Calendar for the week of February 16, 2020 ENTERTAINMENT

5. The W's MFA in Theatre Education has a long reach COMMUNITY