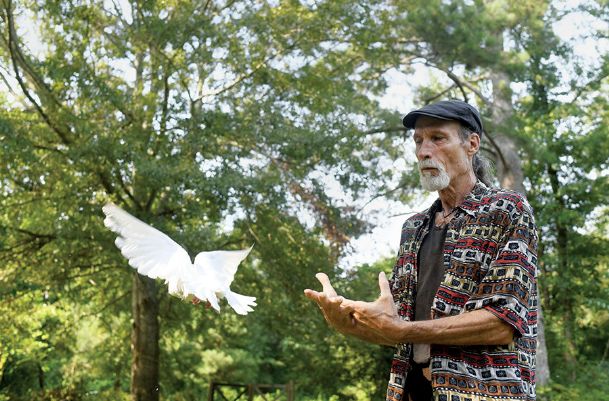 Larry Priest demonstrates a bird release on Wednesday at his home in Columbus. He has been releasing doves at weddings, funerals and other events across the state for more than 20 years. He also breeds doves and raises them along with his half-dozen or so chickens, three turkeys, two dogs and a horse. Photo by: Jennifer Mosbrucker/Dispatch Staff

Larry Priest demonstrates how to hold a dove as he prepares to release it. He first learned how to train birds as a Boy Scout, and his first time releasing doves was at his stepson's wedding.
Photo by: Jennifer Mosbrucker/Dispatch Staff

Priest holds a two-day-old dove chick, remarking on how its eyes aren't even open yet. When the dove grows up, Priest will spend a year training it to return home after being released. He currently has 12 trained doves at his home in Columbus.
Photo by: Jennifer Mosbrucker/Dispatch Staff

His home -- backed by woods and grass with the Luxapalila River "practically in my front yard" -- is his sanctuary. There he can focus on his many artistic pursuits: woodcrafting, jewelry-making, singing and songwriting. He also has plenty of room for the animals he loves, the half-dozen or so chickens, three turkeys, two dogs and horse that roam free in the gated pastures on his property.

He also loves it because it's a safe place for his doves to return.

"There's something special about being out here," he said, holding a young male dove carefully in his hands. "They always know where to come back to and they know I'm not going to hurt them. They trust me. And I take care of them."

He turned the dove slightly to the side, peering down at the small metal band dangling around its ankle. "Number 600," he reads. "I've been doing this a long time."

For more than 20 years, Priest has worked with his doves as a release coordinator, setting them free at weddings, funerals, memorial services and special holidays such as Easter. Although he began as a one-man company called "Angel's Wings," he now only accepts clients based on word-of-mouth and does no advertising.

Even so, his roster is full. He has a waiting list for Easter Sunday every year and many churches and other venues reserve him and his doves months in advance.

Priest releases doves in certain ways depending on the event. He said his most popular releases are the Trinity -- three doves representing the Father, Son and Holy Spirit -- and a single dove released during a funeral service.

"If their spouse was also deceased, sometimes I'll release two," he said. "I just think it's something that makes people feel a little better about the whole thing. When they leave a funeral, they're talking about the doves. Maybe it makes it a little easier."

Priest said that, although dove releases make him decent money, he doesn't take it too seriously. It's why he doesn't advertise.

"It's just a hobby," he said. "Some people hunt for fossils or make jewelry. I do that too, but it's all just something to do in my old age."

'A real special way with animals'

Priest's first foray with birds was in Boy Scouts when he was just a young man. In addition to learning the usual wilderness and preparedness skills, Priest set about learning to train birds.

"I figured it out, but I'm not going to say how," he said. "Those are trade secrets. But since then, I liked working with animals. I've been told I have a real special way with animals."

The main aspect of training release doves is teaching them how to return home, which is often a year-long undertaking. Doves can navigate back to their roost from up to 600 miles away, often at speeds of 30 miles per hour. Most of the doves Priest has know by now exactly how to get home, and it sometimes takes them less than a day to do so.

"If I do a release in Aberdeen, they could be home in less than three hours," he said. "They're really good navigators if it's light out. It's impressive."

Priest is currently in the process of training more doves, he said. He lost all but 12 of his trained birds a couple months ago when an animal broke into the enclosure.

"That hurt," he said. "They're like my children, in a way. And losing them was real tough."

As Priest exited the doves' enclosure, he didn't close the door quick enough. Three or four of them flew free, flapping up toward a neighboring tree. Priest watched them go as some of their molted feathers fluttered to the ground.

1. Food for the soul: Casserole Kitchen adapts to continue its mission FOOD

2. Make taste and nutrition a priority with powerful pairings FOOD