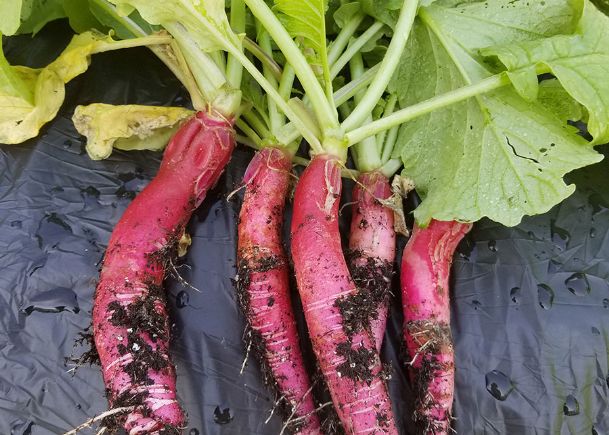 Heirloom plants can be called multiple names. This is likely the case for the Long Beach Red radish. Photo by: Gary Bachman/MSU Extension Service

One of the most fun things to do in the garden is to share stories. One of the best ones I have heard and shared is about my search for the long-lost Long Beach Red radish.

I shared the beginnings of this story last year in this column, and I've received many questions about the radish and its interesting story.

In the early 20th century, Long Beach was the radish capital of the world, and the main crop exported was the Long Beach Red radish. This radish was so long that it looked like a red carrot. The seeds were sent south, and impressive numbers of harvested radishes were shipped back north during the winter months -- up to 300 railroad boxcars a year. They were sliced and set out as bar snacks in northern saloons and beer halls. These radishes vanished after 1930 as other production areas became more economically competitive.

I found an heirloom radish last year called the Cincinnati Market radish, a red radish 6 to 7 inches long, bred in Ohio in the mid-1800s. The seed was shipped south to be grown, and the crop was sent back to the north in the winter. I was on the right track.

Since last year's column on the topic, I have discovered more information in my search for the Long Beach Red radish, so I thought it would be a good idea to share an update.

Common names can really muddy the water when looking for heirloom plants, as a specific plant can be called multiple names. I believe this is the case with the missing Long Beach Red radish.

Now, you'll have to stay with me for this next bit.

And while researching this topic, I found a reference to "The Tale of Peter Rabbit" by Beatrix Potter. According to the reference, naughty Peter Rabbit wasn't munching on a carrot when he got into Mr. McGregor's garden. The author wrote that Peter was eating a long, red radish -- and looking closely at the original illustration, it's clear from the foliage that he is, indeed, eating a radish. Could it be the radish I'm looking for? Geez, now I've gone down the literal rabbit hole.

Could the Cincinnati Market and Long Scarlet (and other name variants) be the same as the Long Beach Red radish? To make matters more confusing, I've found other references that use the common name Long Scarlet Cincinnati. All these radishes are described as being 6 to 7 inches long, red (isn't scarlet red?), with tender white flesh.

Gary Bachman is an Extension and research professor of horticulture at the Mississippi State University Coastal Research and Extension Center in Biloxit and hosts Southern Gardening television and radio programs. Contact him at [email protected]

3. The W's MFA in creative writing ranked No. 1 in nation COMMUNITY

4. In the garden with Felder: Check out this 'Gardener's Bill of Rights' COLUMNS