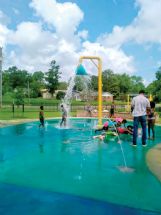 A new feature at the J.L. King Memorial Park splash pad in Starkville is cooling down the dog days of summer, compliments of the Pilot Club of Starkville. A recently-installed overhead bucket feature at the pad fills with water, periodically tipping to shower down on anyone standing below.

Total cost of the project was $10,000. For the past two years, Pilot Club members have held fundraisers including a celebrity wait night and silent auction at Sweet Peppers Deli in Starkville. Funding also came from 4-County Electric Power Association, Pilot International Founders Fund, SOAR and Clark Beverage, in addition to a corporate letter-writing campaign.

Prior to enhancing the splash pad, the Pilot Club, in 2017, installed four playground-sized musical instruments in J.L. King Park to encourage children in musical play. Those elements were an extension of the nine-instrument Pilot Club Music Trail previously established at McKee Park.

"We consider the water bucket our signature project for the current time," said Pilot member Ellen Boles. "The Music Trail took about five years, but then we were looking for what to do next. We talked with Parks and Recreation and told them what we were thinking. They've been really good to work with."

Chris Emplaincourt served as chair of the splash pad project. The cone-shaped bucket was purchased from Moonshot Consultation LLC.

The water bucket, as well as all playground instruments, are accessible to those with disabilities.

An affiliate of Pilot International, Pilot Club of Starkville strives to serve the community and focus on improving brain health and safety. Additions to the parks promote brain development, noted Boles.

The active civic club is already looking ahead.

"We're in the planning stages for what we may do next," Boles remarked. "We've been talking with Parks and Recreation Director Gerry Logan and gotten some ideas from him, so hopefully we're narrowing in."

For information about the club, email [email protected]

3. The W's MFA in creative writing ranked No. 1 in nation COMMUNITY

4. In the garden with Felder: Check out this 'Gardener's Bill of Rights' COLUMNS