Buddy up to Bisquick 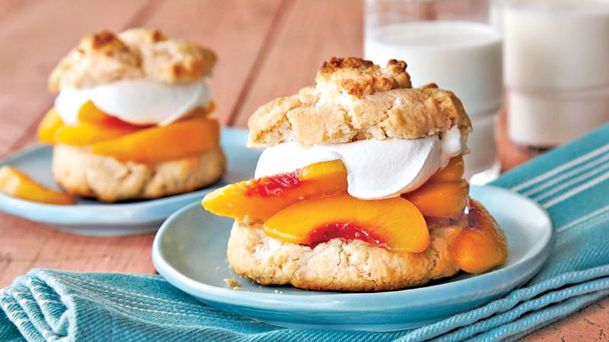 Bisquick has been called the most versatile ingredient in the kitchen. Use it to slice work time for dishes from casseroles to desserts, like these peach-ginger shortcakes. Photo by: bettycrocker.com

This Bisquick chicken alfredo can be ready in about 35 minutes.
Photo by: bettycrocker.com

It was in 1930, so history tells us, that General Mills sales exec Carl Smith sat down to some fabulous hot biscuits in a train dining car. Amazed that fresh biscuits could be delivered in short order on a train, Smith visited the chef's galley after his meal. The chef showed how he had premixed lard, flour, baking powder and salt and kept his prepared mixture on ice so he could readily bake up biscuits for passengers. In the Depression-era '30s, before muffin, biscuit or cake mix, this was a novel approach.

Smith recognized a good idea when he saw it and took the concept back to General Mills. Work soon began on a formula that could be boxed and stored outside the fridge. The result was Bisquick, a handy kitchen helper that's worth a revisit.

Many of us grew up with our parents or grandparents pulling the General Mills Betty Crocker Bisquick out of the pantry to make biscuits or pancakes. The prepared baking mix of flour, shortening, salt and baking powder has withstood the test of time, as useful today as ever, if not moreso. It's been called "the most versatile ingredient in your kitchen" by more than one source, including chowhound.com. This baking shortcut provides faster ways to make so many foods we love, from casseroles to dinner rolls to desserts.

Long summer days packed with activity call for quick-fix suppers. A few suggestions you can make with Bisquick include a healthier alternative to fried chicken -- oven-baked chicken legs breaded in a light, crispy coating full of seasonings. Or try the "Impossible Quiche" recipe made with ham, bacon and Swiss. Make it vegetarian with vegetables instead of meats. (Make sure to let it cool down. The quiche will fall apart if you try to serve it too soon. Let it rest out of the oven for a while, says thekitchenmagpie.com.)

The chicken alfredo recipe today has "everything needed for a complete meal in a pan: chicken, veggie and a side bread," says bettycrocker.com.

For dessert, use Bisquick with fresh peaches from the local farmers market to create peach-ginger shortcakes.

(Note: For extra color, use a combination of zucchini and yellow summer squash. Change up vegetables with fresh broccoli and cut-up red bell pepper.)

Get the full recipe at The Kitchen Magpie.

3. Fire up the grill for smoked fruit FOOD