Camp AMP is both educational and fun 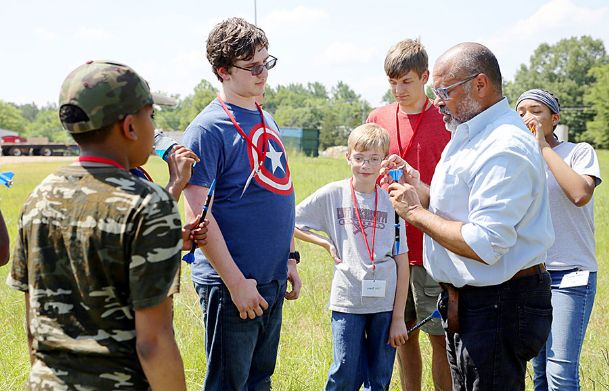 New Hope Middle School student Deja Nichols, 11, jammed the button down on a launch controller, firing the igniter that launched the model rocket she had assembled earlier that day.

Nichols and the 17 other members of East Mississippi Community College's Camp AMP looked skyward as the model rocket streaked upward, reaching a height of about 250 feet before the streamer that slowed the rocket's descent deployed.

Nichols is a member of the first of four Camp AMP sessions this summer at EMCC's Golden Triangle campus. Camp AMP introduces middle and high school students to manufacturing and engineering methods.

On June 3, Greg Stewart, a Lowndes County representative on the EMCC Board of Trustees who works for Aurora Flight Sciences, helped the campers construct model rockets they later launched in a vacant field adjacent to the college.

"I have been building model rockets since I was in fifth grade and I have always liked helping people figure out how to do these type of things," Stewart said.

In the Automotive Technology program, the campers learned to remove brake pads on an automobile and replace them.

"I really enjoy the fact that there is so much hands-on learning in the camp," Armstrong Middle School student Chase Dodd, 13, said. "I like that a lot more than just sitting there and watching somebody else explain something to me."

"It was pretty interesting to see how they packaged things and how robots can actually do a lot of the tasks," Cornelius Harmon, 13, said Tuesday after a tour of Clark Beverage Group.

The whole point of Camp AMP is to expose children to manufacturing at an early age, EMCC Workforce and Community Services Information Specialist Tenise Smith said.

"They may already have a career in mind but after learning more about the programs they may say, 'Hey, I didn't even know about this and it is something I can consider as a possible career,'" Smith said.

Camp AMP includes games designed to serve as team building exercises, with area businesses such as Graham Roofing and McCrary-West Construction participating. There is a mini local area network party that includes gaming, drone operation and virtual and augmented reality systems. The camp wraps up with an awards presentation.

Each Camp AMP session runs Monday through Thursday from 8 a.m. to 3 p.m. and includes a light breakfast, a snack and lunch.

"There are a lot of activities during Camp AMP for the low, low price of $25," EMCC Manufacturing Technology and Engineering Division Navigator Greta Miller said.

There are spots available in the Camp AMP sessions that run from June 10-13 (9th-10th grades) and June 17-20 (6th-8th grades). While preference is given to students in grades 6-10, exceptions are made if space is available.