Versatile empanadas: Looking for alternatives to the summer hot dog? 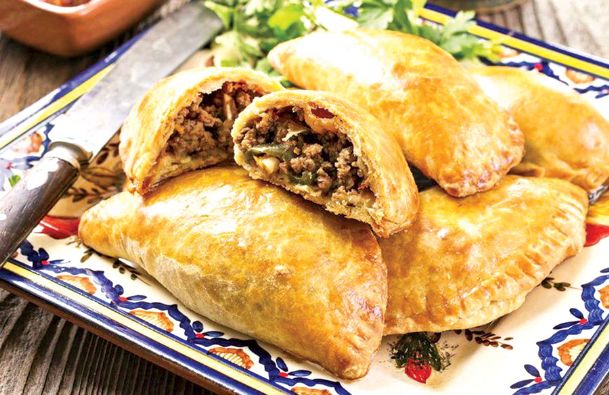 Savory or sweet fillings for empanadas are limited only by your imagination. Fried or baked, use them as the focus of a filling meal, or choose a mini version for appetizers or desserts. Photo by: thedailymeal.com

With a whole summer patio party season before us, my thoughts wander to alternatives for the same-old burgers and hot dogs we often fall back on. Influenced by Cinco de Mayo just past, I've started thinking specifically about empanadas for an upcoming birthday celebration with a fiesta flair. Empanadas are stuffed bread or pastry folded over savory or sweet fillings, fried to a crisp golden brown -- or baked. Cultures and countries around the world have some version -- dumplings, samosas, British or Cornish pasties, Brazilian pastels, Cuban pastelitos, Southern fried pies.

The name empanada comes from the Galician, Portuguese and Spanish verb em pandar, meaning to wrap or coat in bread. Empanadas are mentioned as far back as 1520, in the cookbook "Libre del Coch," by Ruperto de Nola. They can be appetizers or snacks, but they can also easily fill the role of satisfying meal at breakfast, lunch or dinner. When it comes to fillings, almost anything goes. You can opt for seasoned beef, pork, chicken, turkey, seafood, veggies, cheese, the list goes on. Or be inspired by what you find at the farmers market this week. Make your own dough or buy ready-made empanada discs at well-stocked grocery stores, and certainly at most Latin groceries.

"Homemade empanada dough is very easy to make, especially if you have a food processor," says food blogger Layla Pujol at laylita.com. "Making the dough at home also allows you to customize it and add things like herbs, spices and other personal touches ..." (Dough prep varies depending on whether your empanadas will be baked or fried.)

For the birthday fiesta coming up, I'm thinking empanadas made with seasoned beef, chicken or turkey filling, with cheese and other flavorings. For sides, how about grilled corn and maybe an avocado salad, or fresh sliced lime-marinated tomatoes, fresh from the farmers market. It's beginning to sound mouth-watering already.