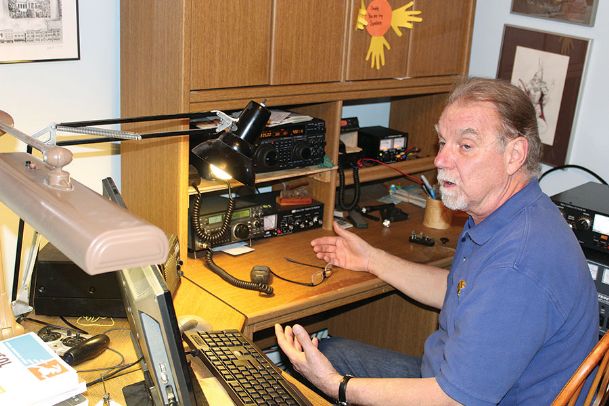 Licensed amateur radio operator Allen McBroom demonstrates his home-based radio station west of Starkville. He is one of nearly 20 members of the Magnolia Amateur Radio Club and has logged contacts with operators in more than 60 countries and all seven continents. Photo by: Zack Plair/Dispatch Staff

Allen McBroom shows Oktibbeha County Emergency Management Director Kristen Campanella a website that allows amateur radio users to use a digital signal for communication and shows users from around the world.
Photo by: Alex Holloway/Dispatch Staff

Allen McBroom stands in the backyard outside his home west of Starkville pointing up toward the sky.

"Over the past two weeks," McBroom continues, "I've talked to people from as far away as Japan and South Africa through that antenna."

This was part of what McBroom called "the 10-cent tour of a 25-cent radio station," a tour that ended in an office in the back of his house where considerably more than a quarter's worth of amateur radio equipment sat ready to use.

From McBroom's transceiver radio hub, he can conceivably talk to someone at the United Nations headquarters, the Vatican, the International Space Station or any of the thousands of other amateur radios around the world. All it takes is looking up what frequency they're broadcasting from, turning a few knobs and hoping someone there responds.

"It's a vast world that goes on unseen by the average person," said McBroom, who is one of about 20 members of the Magnolia Amateur Radio Club in Starkville. "... But any little interest you may have, somebody's (talking about it) on here."

McBroom should know. Since installing his first amateur radio station in 2011, he's logged contacts in all 50 U.S. states, more than 60 countries and seven continents.

Yes, all seven. Though his one contact in Antarctica -- in which he talked briefly with a government researcher -- hit a little closer to home than McBroom expected.

"When I got through, he recognized my call sign ... as one from the Southeast (United States)," he said. "So he asked me, 'Where you from?' And I said, 'Starkville, Mississippi.' He said, 'You're kidding. I'm from Birmingham (Alabama).'"

Amateur, or ham, radio dates back more than a century and has grown from its Morse code-tapping beginnings to a digital-age endeavor that often works in tandem with the internet.

While digital ham radio is still a burgeoning enterprise, McBroom said the most common forms still are continuous wave, with which operators transmit in Morse, and single sign band for voice transmissions.

They transmit on high-frequency wavelengths ranging from 80 meters to less than two meters with equipment powered by 12-volt batteries.

McBroom said most ham radios can reach around the world using 100 watts of power on wave bands between 10 and 80 meters, though he sometimes uses an 800-watt amplifier just to be sure. On a two-meter band, the radio can reach 40-to-50 miles from its own antenna and all over Mississippi if the signal reaches repeater antennas, dozens of which are stationed around the state.

But using web-based Ecolink software, ham operators can hop on other two-meter bands around the world and talk to the locals, McBroom said.

The best part, he added, is communicating over ham radio is free, and all legal operators are licensed by the Federal Communications Commission.

Each operator must pass exams for a technician (Morse only), general or general extra license, for which the government issues them a four-to-six-digit call sign.

The traditional protocol for ham operators, though not required by law, is practiced fairly strictly, especially among the old hands.

"You start (a voice transmission) by stating the call sign of the person you're calling, then your call sign. Then you wait for a response," McBroom said. "Then you have your discussion, and if others want to join, you tell them, 'come on in.' When you're ready to go, you say '7-3,' which means best wishes, and either 'monitoring,' which means you're still listening, or 'clear,' which means you're turning off your station."

Thrill of the hunt

The "thrill" for ham operators is logging as many contacts as possible, and all licensed operators have access to a website where they can see each other's profiles, when and where they are broadcasting and their confirmed contact history.

For McBroom and many other operators, the "prize" is the customary postcards he exchanges with confirmed contacts (whose addresses are listed on their online profiles but only for licensed operators to view).

McBroom made special note of a card he received from Bulgaria in eastern Europe.

"I'm really proud of that one," he said.

On Thursday, Steve Ackers sat at his kitchen table in Starkville, listening to a station in Ghana tap out Morse Code to see if they could get a response.

A third generation ham operator and coder, he understood every dot and dash.

Both his grandfathers knew Morse -- one was a railroad worker and the other a ham radio operator. His father, an electrical engineering professor at Mississippi State, carried on the tradition and passed it on to him.

"I grew up around it, so I picked it up naturally," said Ackers, also a Magnolia Amateur Radio Club member.

Ackers worked 20 years as a truck driver before he retired. He bought a "minimal" ham radio station two years ago and has since logged more than 1,100 contacts.

"That's all over the world and in all 50 states," he said. "About half of that is Morse and the other half side band."

Ackers, now bound to a wheelchair, calls his radio his "ticket to the world."

He listens to contests and special events where operators try to log as many contacts as possible. Sometimes, he even comes across unique conversation opportunities.

"You never know who you're going to talk to on the radio," he said. "I once talked to an astronaut when he was at his house in Florida. A lot of times, you can just get on there and rat chew, but when they get in contest mode, they are rolling out the contacts."

As entertaining a hobby as ham radio can be, it's also a useful tool during emergencies.

When something like a natural disaster knocks out conventional communications, high frequency radios still work, so ham operators are on standby to work with emergency services to communicate with first responders.

The Magnolia Amateur Radio Club even has permanent equipment set up on the second floor of the Oktibbeha County Emergency Operations Center on Main Street -- which is also home to its E911.

"(Even though they are volunteers), we consider the amateur radio guys part of the EOC staff," Oktibbeha Emergency Management Director Kristen Campanella said. "They provide the right people the right information at the right time so they can make the right decision. They are a critical link for our emergency responders, and it's a comfort knowing they're available."

Ham radio operators are trained to pass communications during emergencies, such as relaying damage reports for first responders to address. They can be stationed at a central hub like EOC or deployed to an area of need to report information back to that hub.

At emergency shelters, they can even help displaced victims send and receive messages to other family members.

The Magnolia club meets monthly at the EOC, where Campanella said members have been persistent about bringing her into their ranks.

"It's way over my head how all that stuff works," she said. "They keep pushing me to do it, though. One day I might."

A sense of accomplishment

McBroom caught the radio bug as a child growing up in Panola County.

He distinctly remembers, from as young as age 10, sticking a wire antenna out of his second story window connected to a tube powered short wave radio. With it, he could hear stations like Radio Moscow, the BBC out of London and Radio Havana.

That, combined with reading stories in Boys Life magazine about World War II spies who evaded Nazis while sending radio messages from behind enemy lines, made the idea of transmitting over the radio "intriguing."

It took until eight years ago for him to actually make that dream a reality, but he doesn't regret the investment.

"If I was a millennial, I might be perplexed at how this could be exciting," McBroom said. "But growing up in the '50s, '60s and '70s, radio guys were the heroes because they could make things work when no one else could. Today radio operators tend to be older, but there is a resurgence of young people interested in this.

"I think it's the novelty of it," he added. "If you're under 30, you've never known a world without cell phones or computers. ... But to put out a call to, say, Africa on one of these radios and get a response, you feel a sense of accomplishment."