Puttin' on the dog: 'Grown up dogs' (and a little history) for National Hot Dog Month 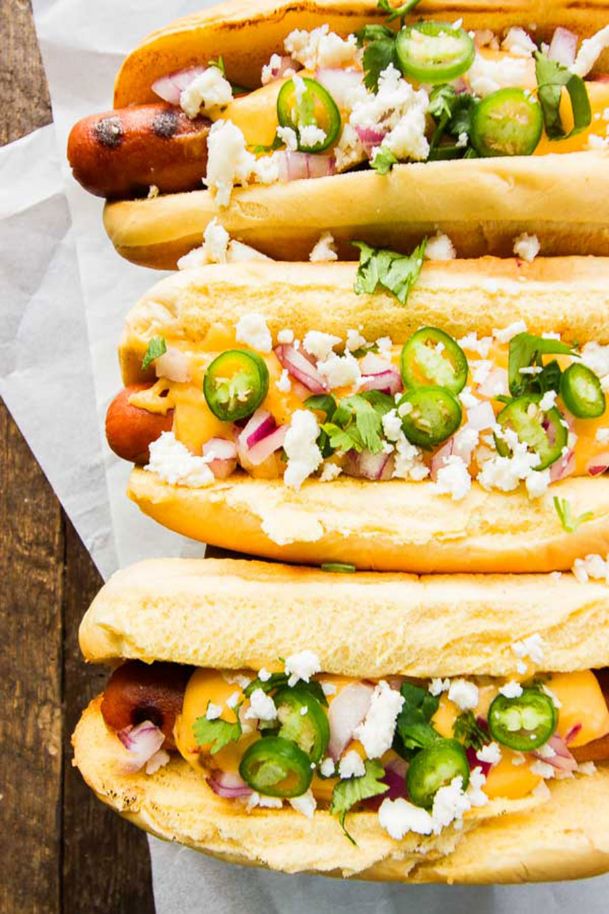 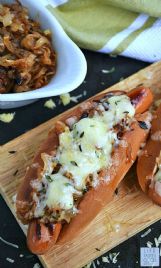 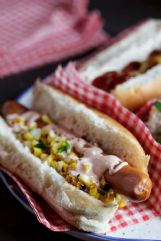 Flavorful corn salsa and a sour cream drizzle dress up these hot dogs.
Photo by: simply-delicious-food.com

July is National Hot Dog Month, and that sent me digging into the back story of one of America's favorite foods. What an entertaining side trip it was.

Ever since German immigrant Charles Feltman sold little thin sausages in milk buns from his stand at Coney Island in 1871, Americans have been wild for hot dogs.

The earliest origin of the "dachshund" or "little dog" -- sans bun -- is a topic of some tussle between frankfurter factions. Some wiener advocates assert it was developed in Frankfurt, Germany, in 1487. Another camp champions a butcher in Coburg, Germany, in the late 1600s, so says the National Hot Dog and Sausage Council. Either version is proof of real staying power. While culinary historians battle it out, one thing seems sure: Immigrants brought the "little dogs" to America in the 1800s. And Feltman? Records show he sold 3,684 dashshund sausages in milk rolls in his first year in business.

I think we've been gobbling them up ever since, especially in summer when hot dogs are staples at picnics, poolsides and cookouts. According to Council statistics, we consume about seven billion between Memorial Day and Labor Day -- about 150 million on July 4 alone. And while there's not a thing wrong with ketchup, mustard and relish, National Hot Dog Month is a good time to remember hot dogs can go gourmet. Which is why today's food pages carry recipes for Mexican gourmet cheese dogs, French onion dogs and corn salsa and sour cream hot dogs.

The Mexican cheese hot dogs are dressed with cheddar and queso fresco cheese, serrano peppers, red onions, crumbled bacon and more. The French onion brings the essence of French onion soup to a summer dinner, with savory caramelized onions and gooey Gruyere cheese, all on a toasted bun brushed with garlic butter. Or, imagine serving up dogs topped with a salsa made with seasoned grilled corn and finely chopped onions and chilies, then crowned with a sour cream drizzle. These are "grown up" hot dogs.

OK, back to a bit of interesting history. Who first called them hot dogs? Well, that's also up for interpretation. The myth goes that cartoonist Tad Dorgan with the New York Journal saw food vendor Harry Stevens shouting "Get your red-hot dachshund sausages!" at the New York Polo Grounds, circa 1890s. He allegedly illustrated the scene with a dachshund dog nestled in a bun with the caption "Get your hot dogs!" No one has been able to unearth the actual cartoon, however, as firm proof.

Prominent food historian and linguist Barry Popik says "hot dog" began appearing in college magazines in the 1890s. Yale University students referred to the wagons selling hot sausages in buns outside their dorms as "dog wagons." Popik found the first reference to "hot dogs" in an Oct. 19, 1895, article in the Yale Record which referred to people "contentedly munching on hot dogs."

Yes, hot dogs, high in fat and sodium, are best in moderation. Read up and make informed decisions. Sales of organic hot dogs, by the way, have risen sharply in recent years. You may want to give them a try this summer as you serve up an iconic American favorite. We loved them as kids; we can love them as adults.

1/3 cup milk more or less, depending on desired consistency

For the corn salsa:

Salt and pepper to taste

For the sour cream drizzle:

Sausages of your choice