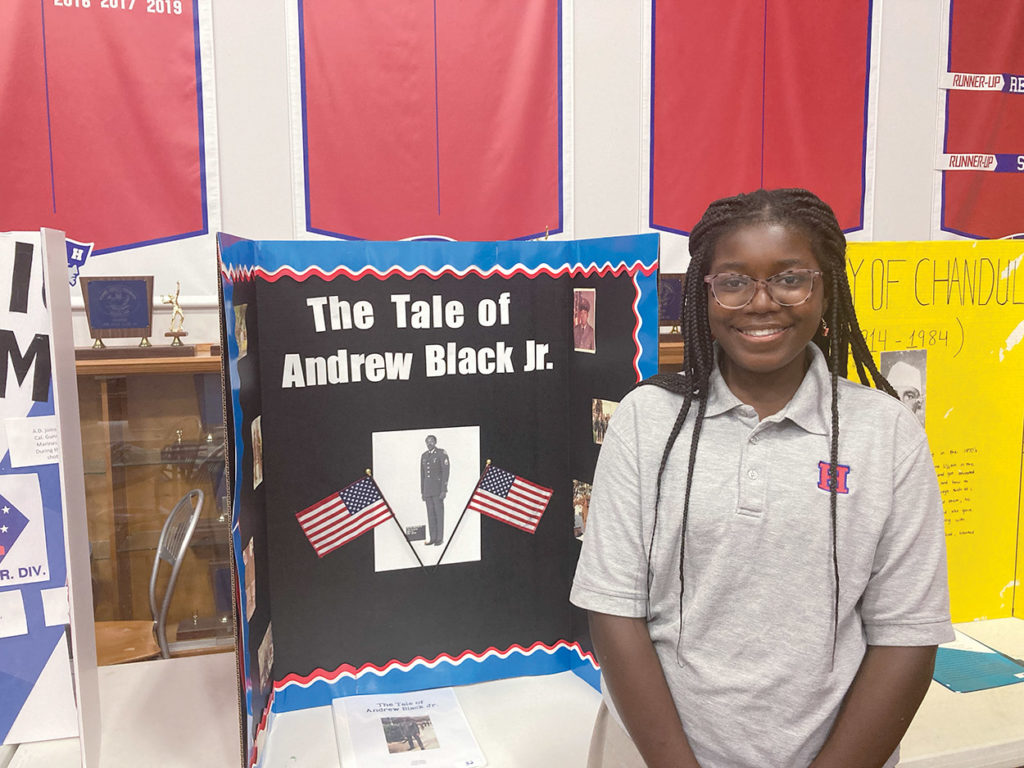 Abigail Black stands with her family biography project on her grandfather, Andrew Black Jr., Friday in the gym lobby at Heritage Academy. He served in the military and traveled throughout the world. All ninth-graders at the school had to complete the project for their English classes. Nicole Bowman-Layton/Dispatch Staff

Heritage Academy ninth-graders shared family stories with the entire school Friday, as their family biography projects for Patricia Evans’ English classes sat on display in the gymnasium lobby during school.

Visual presentations were accompanied by five to seven page reports written by the students over the course of about six weeks, Evans said. While they were mainly about family’s history, there was also some local and world history.

“It caused a lot of conversations in the families,” she said. “Sometimes a student would be doing a story on a great-grandparent and then they’d learn something neat that the other great-grandparent had done and they’d switch projects.”

The displays featured family members whose accomplishments ranged from being in the military to placing sixth in an international ski competition to being a businessman to being a parent.

Family abroad
Krish Patel’s grandfather, Jashbhai Patel, was three years old when India received its independence from Great Britain. He worked as a farmer in India. In 2000, he moved to the United States and now lives in Alabama.

“My grandfather doesn’t speak English,” Krish said. “I talked to him on the phone and my mother helped translate.”

Armando Leyva also had to translate the interview he had with his grandfather, Fernando Olivares, who lives in Mexico.

Veterans
Enzi Norway’s grandfather, Luis Agot, was from the Philippines.

“His life was formed around war,” she said, noting that he was in the Philippines during World War II and served in the Korea and Vietnam wars.

She said the most interesting piece of information she found out about Agot was from his childhood, when the people of the Philippines fled into the mountains during World War II to avoid being captured and tortured by Japanese soldiers.

CJ Gathings learned about his uncle, John L. Phinesey Jr., who served in the US Marine Corps. He fought in Vietnam, Desert Storm, Afghanistan and Korea.

“After the wars, he’d train people and later joined them on missions and saw them die,” CJ said. “He has PTSD. He lost faith, but eventually found his way back to God.”

Abigail Black did a report on her grandfather, Andrew Black Jr. He served in the military and she enjoyed listening to his stories about his time overseas. One thing she didn’t know about him before the interview was that he is a junior.

Hays Sansing interviewed his great-uncle, Sgt. Howard L. Sharp. During his time in the military, he helped save people off a ship that was sinking, Hays said.

The family biography displays that include veterans will be on display during the Veteran’s Day ceremony, which is scheduled for 9 a.m. Nov. 11 at the school.

Artists
Rowan Albertson wrote about her seventh cousin, Dolly Parton, and included a family tree in her presentation.

“I have always loved Dolly,” she said. “She’s a good role model, singer and has great Christian values.”

Albertson said she did most of her research on the internet.

“I knew she grew up poor, but I didn’t know how poor they really were and what they did to survive,” she said.

During their talks, Dena said that part of her sculpture featuring casts of the faces of famous blues musicians in Mississippi had been selected to be a permanent piece at the Smithsonian museum in Washington, DC.

Other family
Molly Kate Cuthbertson did her report on her brother Mikias, who is adopted. She noted that the project was easy to do.

“I learned a lot about the adoption process, what my parents went through and what he thinks about home and stuff,” she said.

Ella Kathryn Naugher did her report on her great-grandmother Gloria Kathryn Edwards, who raised her grandchildren.

Alison Kreiger interviewed her father, Colin Krieger. She said she already knew he was a hard worker but didn’t know about some of his accomplishments until during the interviews.

“I didn’t know how well known he was throughout Columbus and West Point for his time as a firefighter,” Dalton said. “He helped a lot of people through the years.”

Kaylee West paid tribute to her grandfather, Arlen West, with a snowy hill themed display, complete with fluffy cotton snow and mini fake trees. He was a good skier, so good in fact, that he placed sixth in an international competition in Canada and had a chance to compete in the Olympics. Olympic skiers were not paid to compete then, so he decided to work to support his family.

“I love to ski too,” she said. “It’s big in my family, so that’s why I chose to decorate my display in that theme.”

To help them create their narratives, Evans went through each step — conducting research, recording interviews, formatting, etc. — throughout the six weeks.

“For some kids, this was their first formal writing project,” she said. “It helps them get their feet wet.”