All in the family: Father’s Day gives pediatric dentists extra reason to smile 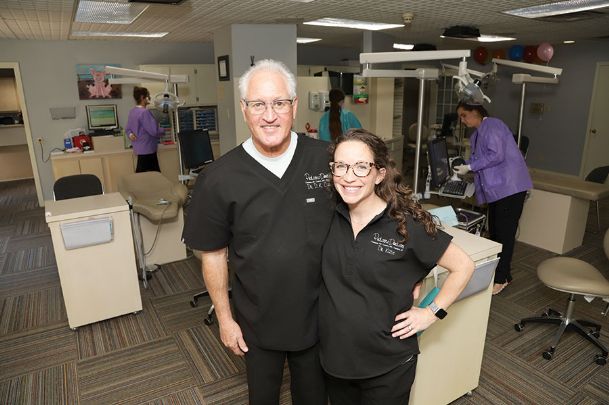 When a child grows up to follow in dad’s footsteps, most fathers will admit to a bit of pride. But when pediatric dentist Dr. David K. Curtis really thinks about the fact that not one, but both of his children, became pediatric dentists themselves, it can sometimes, he admitted, seem almost surreal.

“It would be easy to say it’s a dream come true — but the truth is, I never dreamed it could happen,” said Curtis, of Columbus. “The fact that they chose to go into my profession is humbling.”

The Curtis siblings’ career choices are rooted in their childhood.

“They lived here,” said David, referring to the dental clinic in Columbus. He’s been in practice for 31 years, and Kennon’s and Katie’s mother, Pat, is administrator of the clinic. “They came in after school and did their homework here. They were immersed in what I do. And I think they saw I was also a pretty happy person.”

Kennon, the eldest sibling, remembers well being at the clinic as a kid. He joked there may still be surviving stories of “me as a young boy terrorizing” the kind-hearted staff.

When he was old enough, Kennon was given tasks, like alphabetizing the paper charts that predated the digital era.

“I spent plenty of time shadowing Dad and watching his interactions with the families and the children, seeing how he built those connections,” he said.

Katie recalled, “I can remember when I was 7 or 8 helping wipe down chairs, and later helping with things like some sterilization. As I got into high school, I would help more do the job of an assistant.”

When did they know they wanted to study dentistry?

“I think there was a period around first grade that I wanted to be a movie star but eventually realized I had no acting ability,” Kennon laughed. “But really I think (dentistry) is what I’ve always wanted to do. I really cannot remember a time when I did not feel that way.”

As the only pediatric dentist in Lowndes County, David was frequently recognized by youngsters in the community. His children noticed.

“I grew up with kids running up to Dad to tell them about their baseball games or dance recitals,” Kennon said. “Everywhere we went, kids recognized him. I just thought he was really famous.”

By ninth grade, Kennon was having serious discussions with his parents about eventually entering the profession.

“They were making sure it was something I really wanted to do, not just following along because Dad did it,” Kennon said.

After attending Heritage Academy, he entered Millsaps College, then graduated from the University of Mississippi. Like his father, he earned his Doctor of Medicine in Dentistry (D.M.D.) from the University of Mississippi Medical Center School of Dentistry. After completing two years of pediatric residency at Batson Children’s Hospital in Jackson, he fulfilled additional requirements to be recognized as a certified pediatric dentist by the American Board of Pediatric Dentistry. He has been in practice since 2013.

Following the model of Kennon’s parents, his wife, Candi, is the practice administrator in Madison.

“I don’t know how I ever would have gotten this off the ground without her,” Kennon said.

On her career path, Katie considered other medical fields but found herself drawn to helping children.

Having often been identified in the dental school community as “Dr. Curtis’ daughter” in Mississippi, Katie honed her own identity in Texas.

“San Antonio was a huge challenge. I grew so much in that two years,” she said.

In 2017, Katie and her husband, Ripley native Bennett Windham, returned to Mississippi, where Katie joined her father and brother in providing individualized dental care for infants through teenagers, as well as special needs patients.

She and Bennett are parents of a 2-year-old daughter, Julia, and are expecting their second child in July.

Working with her dad and mom every day at the Columbus clinic is a treat, Katie said.

“I can’t imagine a better work/life situation than I have.”

For David, the transition from solo practice to working with his daughter has been a smooth one. In some partnerships, doctors see strictly their own patients, “But we decided we would see patients together,” David explained. “A day doesn’t go by that I don’t say, ‘Dr. Katie, would you look at this with me?'”

The collaboration benefits both father and daughter, said Pat. David’s vast experience and guidance is valuable to Katie. And Katie brought with her new knowledge and new spirit.

Pat, all agree, is essential to the entire equation.

“The whole thing, none of it works without Pat Curtis,” added Bennett. “She takes care of all of the girls in the office, and she makes the whole operation run. The same goes for Candi in Madison. There’s quite a bit of teamwork involved.”

Of course, three dentists in the same family may stack the deck when everyone gets together outside of work.

“Oh, family gatherings are lively, and yes, they all live and breathe pediatric dentistry,” Bennett said. “It’s a topic at every gathering, every dinner table, every leisure time. If there’s ever a question, or if they saw something interesting that day, they discuss it with each other. They’re committed to what they do; they’re very passionate about the whole thing, and they really care about helping kids.”

“I’m hoping to live up to the legacy,” said Katie, who found it easy to become emotional when talking about what working with her family means to her.

“I always wanted to be a mommy,” she began. “That was always a main goal, but the pediatric dentistry just took a special place in my heart, too.” She is now able now to combine both well. “Being in dad’s practice has made all of my dreams come true.”

Connections, he emphasized, are at the center of all he, his sister and dad do in their practice.

“It’s at the core of everything. You’ve got to have that trust, not only from the child but from the parents as well. Dad’s mannerisms and his way with people, not just in the practice but in everyday life, it’s something that I’ve learned from him.”

On Father’s Day especially, David has a sense of gratitude: His children share in a calling he cares deeply about.

“It gives me a real joy,” he said. “I’m just blessed in so many ways it’s hard to describe.”