Casseroles & Ghosts: Things go bump in the night as the casserole patrol takes a final bow 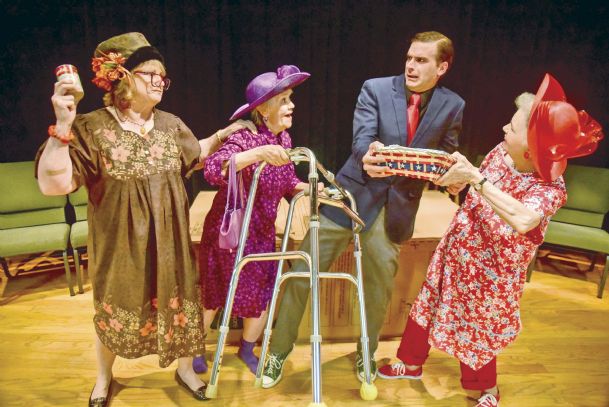 From left, “Casseroles and Ghosts” cast members Gwin Edie (Gracie), Paulette Garton (Juanita), Mark Huerkamp (Rick) and Nancy Wheeley (Oda May) channel their characters Wednesday. Columbus Community Theatre presents this final chapter in the “Casserole Patrol” series of plays by Laura Thrash Oct. 28-31 at the Rosenzweig Arts Center. The significance of the cardboard box behind them will be revealed at the play. Photo by: Luisa Porter/Dispatch Staff

Something strange is afoot in the fictional Possum Town the casserole patrol calls home. What better time than Halloween to share it with audiences during the Columbus Community Theatre production Oct. 28-31? “Casseroles and Ghosts” will be a swan song of sorts for the patrol. This is the CCT’s final presentation in the four-part series of “Casserole” plays written by Mississippi’s Laura Cole Thrash of Philadelphia.

The series revolves around a circle of friends — women of a “certain maturity” — who flock to win the affections of every recently-widowed man with food.

“These comedies set in a small Southern town are inspired by the tradition of women bringing casseroles to widowers, in hopes of sparking a new romance,” explained Linda Bobbitt, who directs the play, as she did the three preceding it in the series.

Area audiences were first introduced to the quirky patrol of women in 2012, when CCT presented Thrash’s original “Casserole Patrol.” The next two plays were produced in 2013 and 2014.

Thrash, the series’ writer, has said, “‘Casseroles and Ghosts’ picks up where the last play, ‘Casseroles and Mistletoe,’ left off.” When she penned the initial play, she never expected three more to follow.

“I loved the first one because it was the original idea. And I loved ‘Casserole Patrol Wedding’ because when I wrote the first play all the personalities weren’t etched in stone and developed yet. They were by the second play.”

Columbus’ original patrol cast from 2012 is still practically intact and long ago developed a bond that keeps them coming back.

Unfortunately for the widowers around town, however, the patrol’s questionable skills in the kitchen haven’t improved since audiences first met them.

The women of the patrol — Ernestine, Flora May, Gracie, Juanita, Manzie Lou, Mona Lee, Oda May, Tiltsie and Wilma Jane — know time is marching on. They’ve long talked about finding a place where they could live out their old age together, taking care of one another. When one of them is bequeathed a building in a will, it seems their problem may be solved. The abandoned Forest Hospital, with plenty of rooms, a big kitchen and lots of bathrooms, is just right. Or, is it?

Things go bump in the night as antics unfold. Expect scheming and swooning as the cast’s 12 female and five male characters discover a few unsuspected truths.

Mark Huerkamp portrays a lawyer in “Casseroles and Ghosts,” one of the new characters audiences will meet, one central to the plot.

“I’m moving to the stage in this one,” he said Wednesday. “I was on the crew, doing lights and sound, for the second and third plays.” His “Rick” allows plenty of room for expression, from accent to mannerisms. Huerkamp is embracing it.

Gwin Edie has been “Gracie” since the first play three years ago. She loves her character, who believes the way to a man’s heart is through pork and beans. Edie was among several in the cast who traveled to Philadelphia early on to watch one of Thrash’s “Casserole” plays performed there and got to meet the author.

“She’s been so good to let us add some local color to the scripts,” said Edie. “And in this one, like the others, there’s all kinds of shenanigans going on.”

It was important to the cast to finish out the whole four-part series. Their characters have become part of them, they say.

“We know them so well, we know what they’re thinking before they talk,” said Paulette Garton, who has been “Juanita” (War-niter) since the second play. “It’s kind of sad to see them go.”

Each of the CCT’s previous “Casserole” productions has been well-received.

“(These plays) make us relax and laugh, I think that’s part of the appeal,” continued Bobbitt. “The people who come, they honest-to-goodness laugh.”

Vicki Hill has portrayed the unsinkable Manzie Lou since day one.

“I’ve loved it, and the patrol has stayed pretty much together for all four years,” she said. “We want to go out together, doing the last one.”

Oct. 30 and 31 productions will be dinner theater performances at 6:30 p.m. Dinner theater tickets are $20 and must be purchased in advance.

Tickets are available at the Rosenzweig Arts Center Tuesday through Saturday, 9 a.m.-5 p.m., or reserve them by phone by contacting the Columbus Arts Council at 662-328-2787. Some of the ladies get flirty with a new acquaintance. From left are Paulette Garton, Mark Huerkamp, Nancy Wheeley and Gwin Edie. Photo by: Luisa Porter/Dispatch Staff